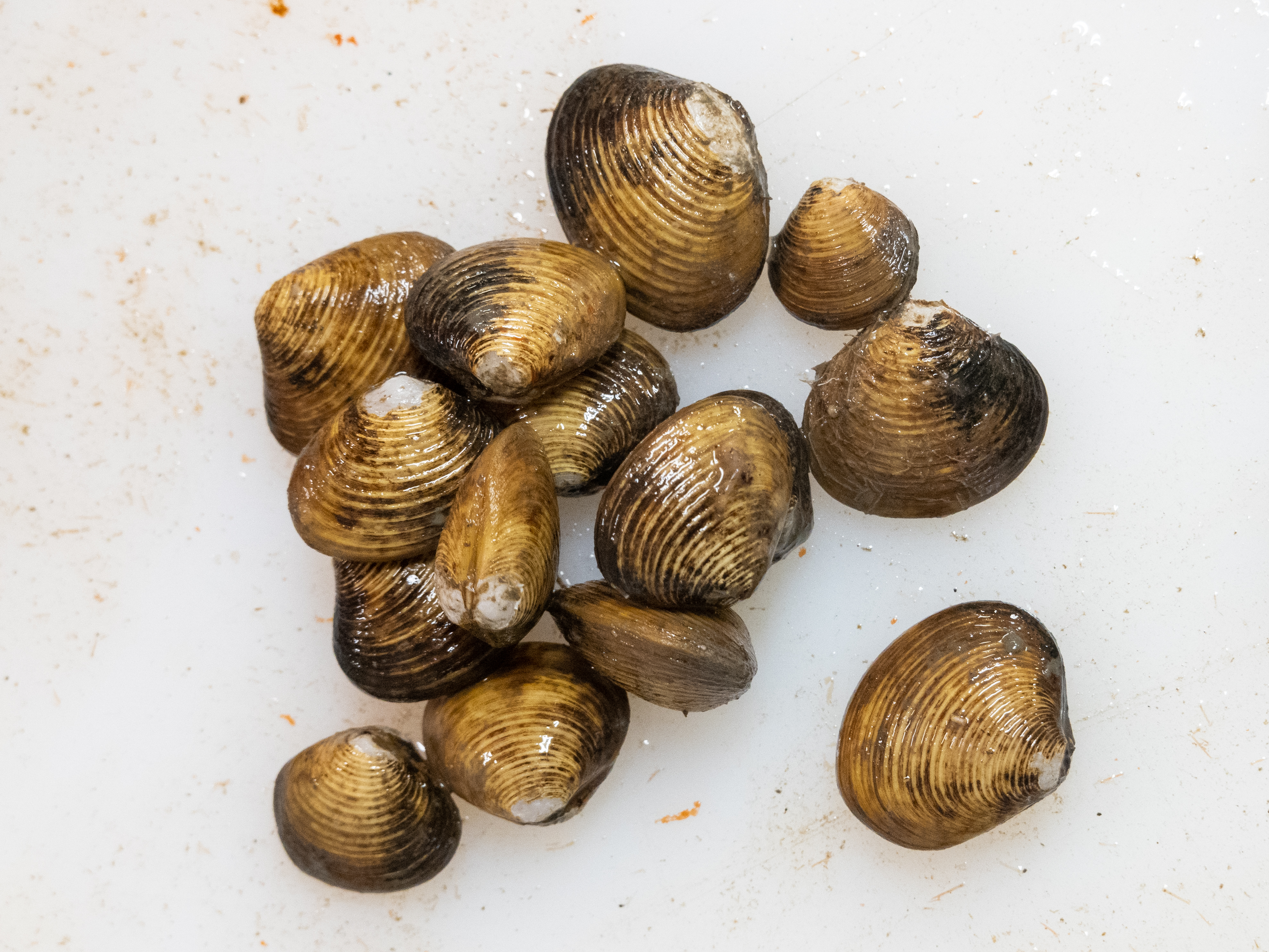 Norwegian and Russian vessels harvest northern shrimp over the stock’s entire area of distribution in the Barents Sea. Vessels from other nations are restricted to trawling shrimp only in the Svalbard zone and the Loophole (international waters of the central Barents Sea). No overall TAC has been set for northern shrimp, and the fishery is regulated through effort control, licensing, and a partial TAC in the Russian zone only.

The regulated minimum mesh size is 35 mm. Bycatch is constrained by mandatory sorting grids, and by temporary closures in areas with high bycatch of juvenile cod, haddock, Greenland halibut, redfish, and shrimp ( 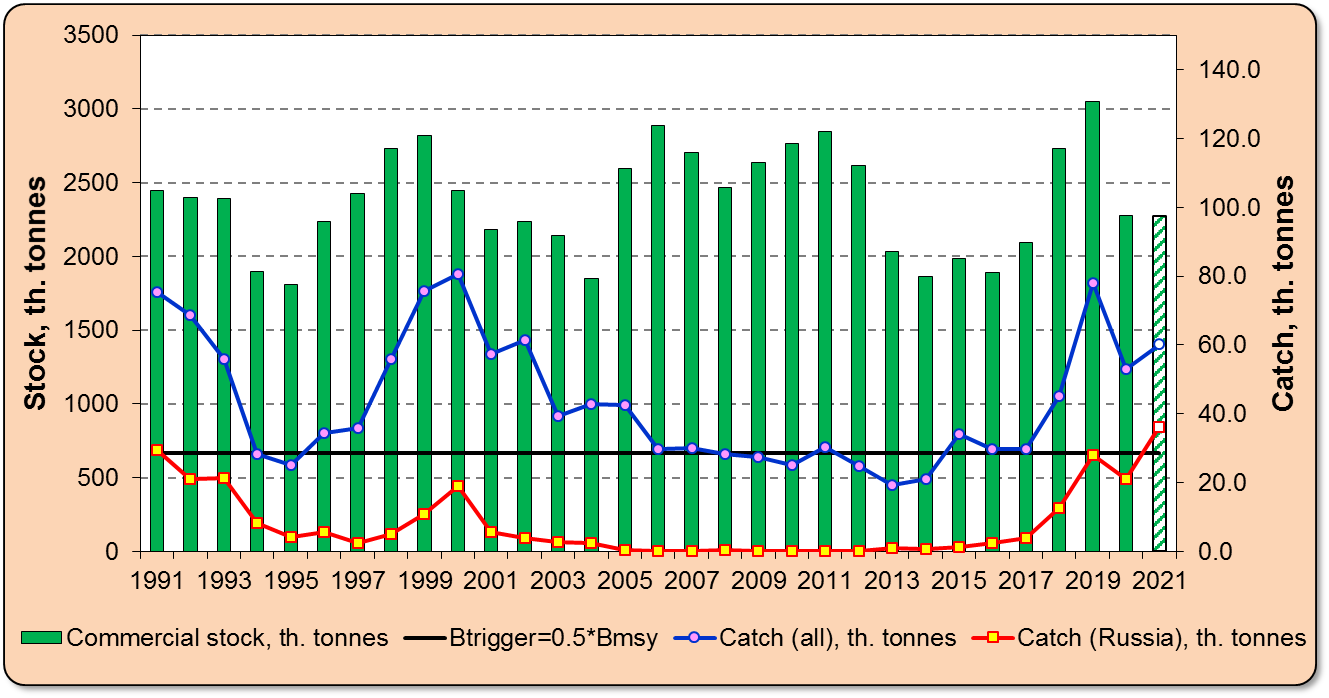 Geographical distribution of the stock in 2009–2019 was more easterly compared to previous years. As results, catch levels from some of the more traditional western fishing grounds have declined. Recent reports indicate lower catch rates than would be expected given the overall good stock condition. This may be related to operation costs for a relatively small fleet to move away from more traditional fishing grounds, and to find new grounds with commercially viable shrimp concentrations (Fig. 3.10.2.2). 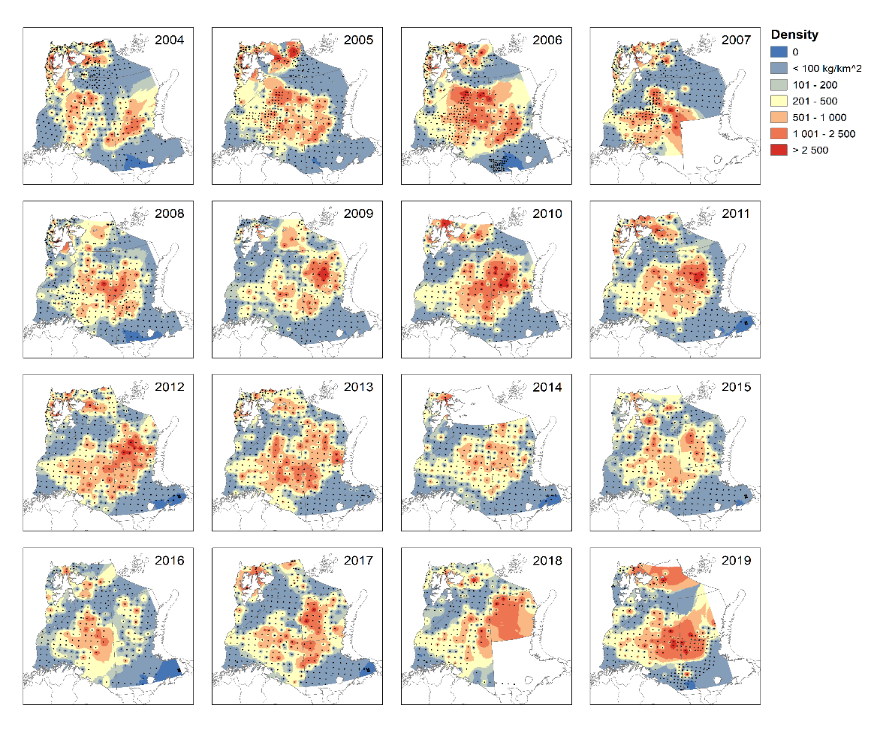 Trawl surveys of northern shrimp stocks have been carried out in the Barents Sea since 1982. During the 2005–2020 period, the stock was relatively stable.

The commercial fishery for red king crab in the Russian Economic Zone (REZ) of the Barents Sea has been carried out since 2004. Russian Fisheries Regulations stipulate that males with carapace width greater than or equal to 150 mm can only be caught using traps. Trawl by-catch of crabs must be returned to sea.

Heavy exploitation of the stock during 2005–2006 led to a decrease in the commercial component of the red king crab population, and reduced productivity in the fishery. In 2011, decreased fishery pressure prompted population growth, and subsequent stabilization of the commercial stock. In 2020, fifteen Russian vessels fished for red king crabs in the eastern Barents Sea, the Murmansk Rise, and Kanin Bank, and Kanino-Kolguevskoe Shallow using rectangular and trapezoidal traps. Total catch also increased in subsequent years; in 2020, total catch of red king crabs in Russian Economic Zone was 10.8 thousand tonnes, the commercial stock index for red king crab was 215 thousand tonnes (Fig. 3.10.2.3). 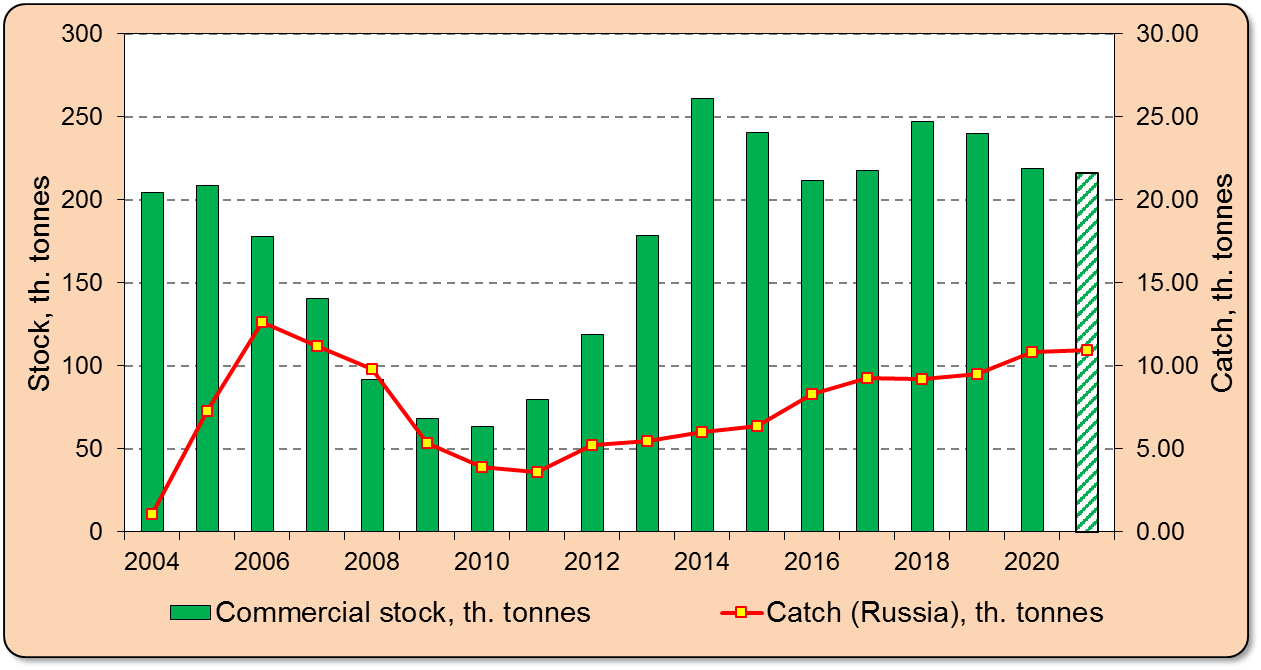 The distribution of red king crab is assessed by trap and trawl surveys. In the coastal part of the Barents Sea Russian vessels have been using traps for investigations since 2008. The highest density of egged females was detected in Kanin peninsula region, in shallow waters 20-30 m depths. Quantity of berried females near the Kanin peninsula have increased in recent years. Its catches reached up to more than 90 ind/ trap. The highest catches of commercial males were found in Varanger-fjord (Stesko, 2019). Modern stock assessment of red king crab in REZ is based on special trawl surveys 2017-2020. It increased until 2018-2019 but has particularly decreased since 2020. The main clusters of crab commercial stock shifted to eastward. So, the densest concentrations of commercial sized male crabs (more than 500 kg / 15 min trawling) were observed in Kaninskya Bank and western part of Kanino-Kolguevskoe Shallow (Bakanev and Stesko, 2021 (in print)). The most easterly extent of red king crab distribution was recorded in 2015 and 2017. Two adult individuals (male and female with clutch) in eastern Pechora Sea near Vaygach Island, and the southwestern coast of Novaya Zemlya Archipelago. Some crabs were caught in the “Gorlo” of the White Sea. Science observer participating in the snow crab fishery reported findings of red king crabs near 75 N 48 E of the Barents Sea, but it was not verified by photo or video (Stesko and Bakanev, 2020). This change in distribution could be caused by both migrations to find new food resources and climatic changes. In the Russian part of the Barents Sea, red king crabs will be able to migrate in the eastward and north-eastward directions. There is quite little chance of king crab migration to the “Basin” of the White Sea due to unfavourable environmental conditions.

The Norwegian fishery for the red king crab (RKC) is subjected to two different management regimes; a vessel quota fishery in the quota regulated area (QRA) and a free fishery with a discard ban in the free fishing area (FFA) west of 26°E (North Cape) (See Sundet & Hoel 2016, for detailed information).

The Norwegian fishery for the RKC have taken place since 1994, but the commercial fishery started in 2002. In 2008 there was a dramatic change in the management of this fishery with the introduction of an annual vessel quota in tons, minimum legal-size restrictions fishery for both male and female crabs on 130 mm carapace length and trap limits of 30 traps among other things. Since then, the annual total quota (TAC) has varied between 900 and 2000 tons (table 3.10.2.2). Number of participating vessels have increased since then and more than 700 vessels participated in 2019 (Fig. 3.5.2.4). This fishery is strictly monitored and the landings each year were always identical to or close the annual TAC (Table 3.10.2.1).

The fishery in the FFA has varied much between years and has mainly taken place in western Finnmark, close to the western border of the QRA (Fig. 3.10.2.5).

Figure 3.10.2.4. Landings of male red king crabs in Norwegian quota regulated area (QRA) divided on 5 different sub areas during 1994 – 2020. Number of participating vessels for each year are shown in numbers on top of the columns.

Figure 3.10.2.5. Landings of red king crab from the Norwegian free fishing area (FFA) west of 26° E. Number of participating vessels are shown in numbers on top of columns each year.

Russian vessels used conical and trapezoidal traps for the snow crab fishery until 2018, but now they use mainly conical traps. Statistics for the Russian snow crab fishery in the Barents Sea during 2013–2020 are shown in Table 3.10.2.2. 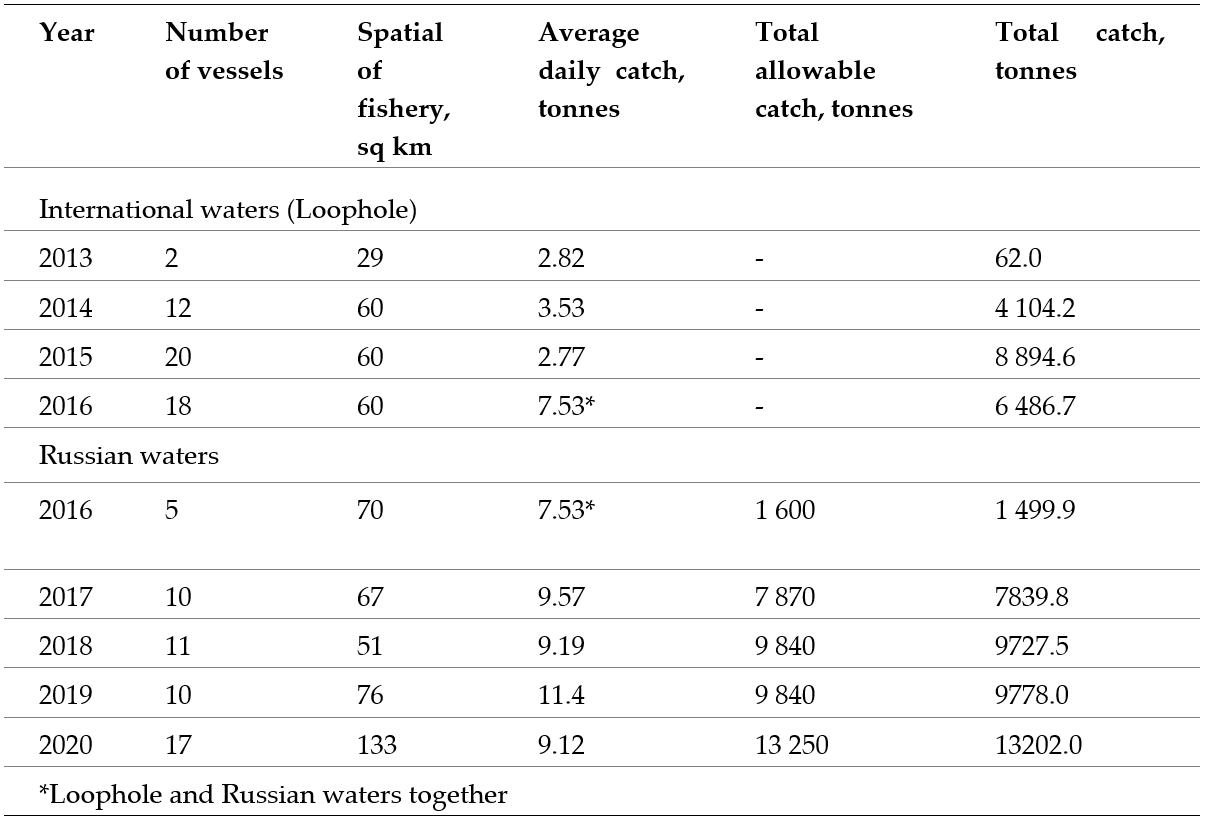 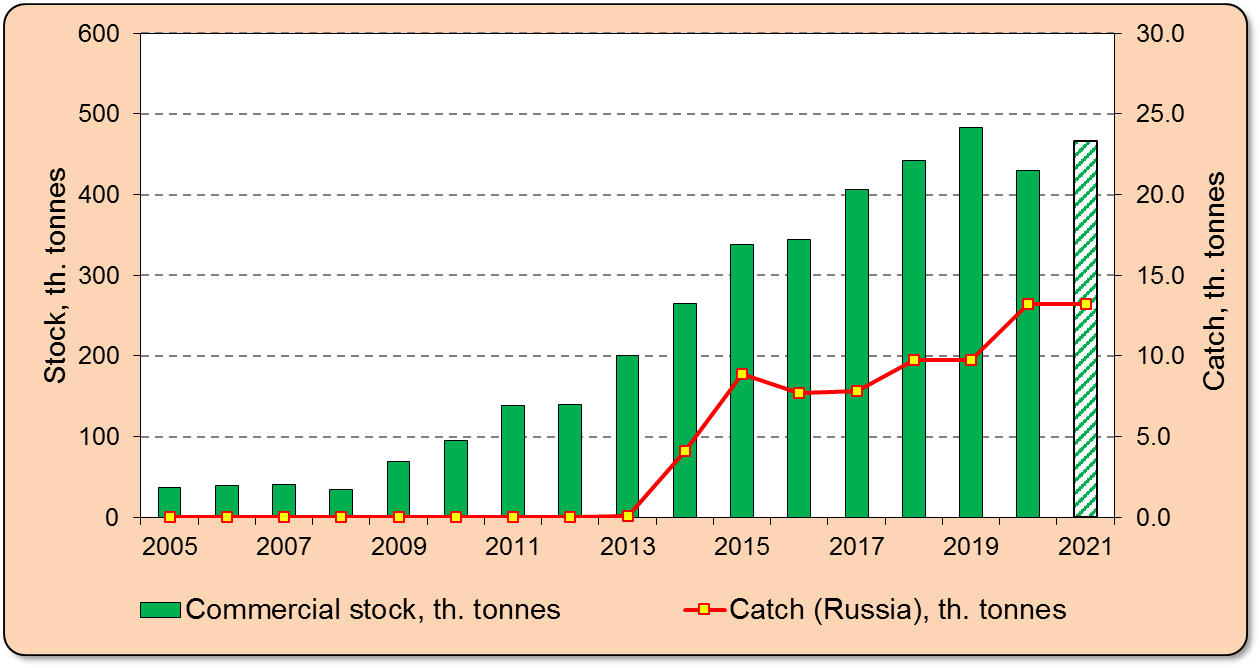 Regulations in the Norwegian fishery for snow crab

The fishery for snow crab commenced in 2012, and the main fishing area is in the central part of the Barents Sea. The fishery is an offshore fishery, and the fleet consists of large vessels between 40 and 70 m with on-board processing. The vessels probably operate between 1000 and 2000 pots every day. Snow crab in the Barents Sea fishery are exclusively harvested using conical pots deployed in strings connected to longline. The minimum legal size for male snow crab in the Norwegian fishery is now 95 mm carapace width (CW). All undersized snow crabs and females must be returned to the sea. Management regulations in the Norwegian snow crab fishery are as follows: minimum legal size of 95 mm CW ; maximum of 9,000 pots deployed per vessel; maximum soak time for pots of three weeks; mandatory use of pot gear only; the fishery is closed and all pots must be removed from the seabed from June to October; and a maximum of 20% post moult crab caught (Norwegian Fisheries Directorate (www.fiskeridir.no), 2018). 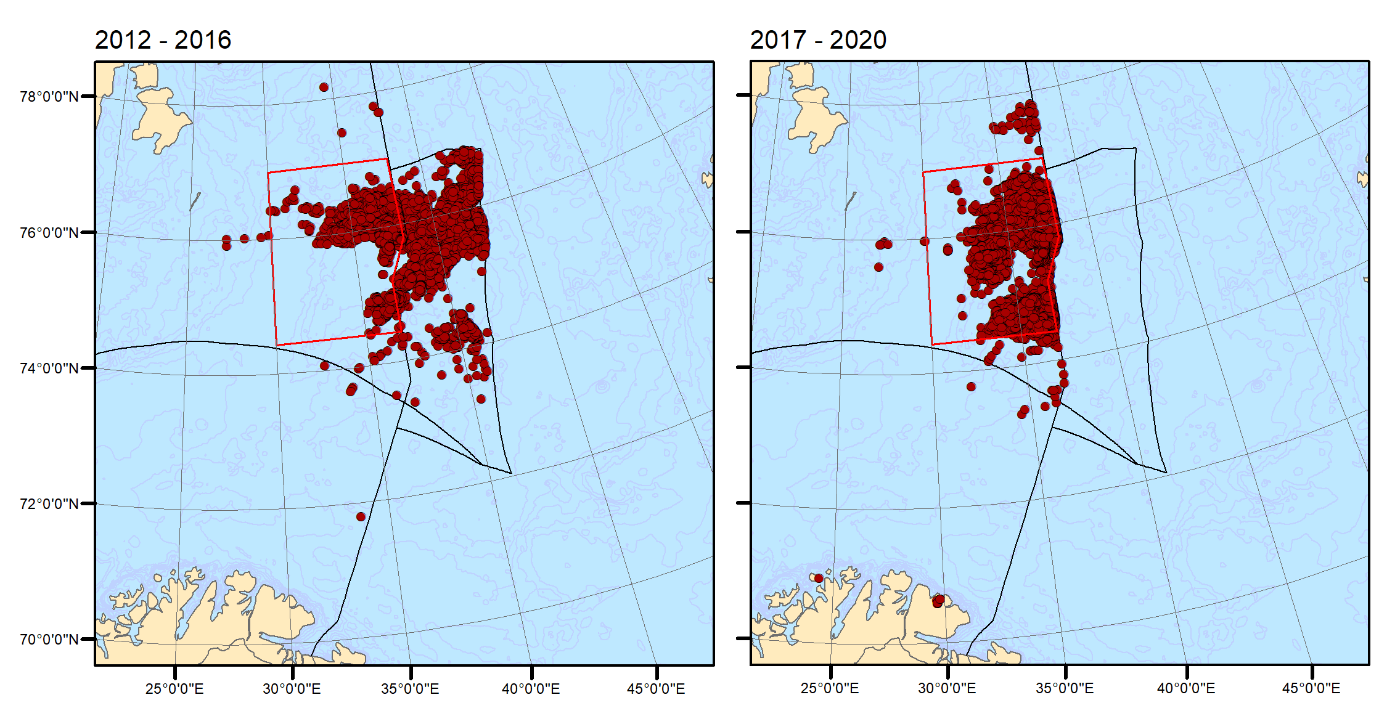 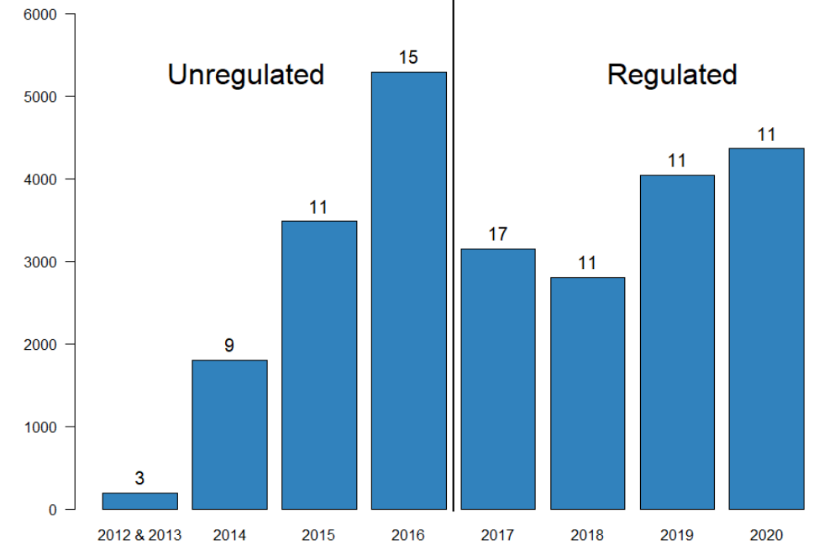 Figure 3.10.2.8. Overview of landings (in tonnes) of snow crab from the Norwegian fishery in the period 2012 to 2016, when the fishery was unregulated. The landings from 2017 until 2020, is represented for the quota regulated period. Number of vessels participating in the fishery noted on the top of the columns.

The snow crab will be managed with the goal of sustainable harvesting based on the knowledge on how the species affect each other in the ecosystem. This will be achieved by balancing two sub goals; maximizing long-term catch yield and minimize the risk of unwanted ecosystem effects.

Table 3.10.2.3. Overview of fishery statistics from the Norwegian fishery. Recommended TAC options, set TAC, number of vessels participating in the fishery landings and total landings in the Barents Sea in the period during 2012 – 2020.

The further spread of the snow crab population to the west and northwest at the Norwegian continental shelf, will probably depend on temperature and food resources. The highest densities are still in central parts of the Barents Sea, with some scare observations on the west coast of Spitsbergen Island.