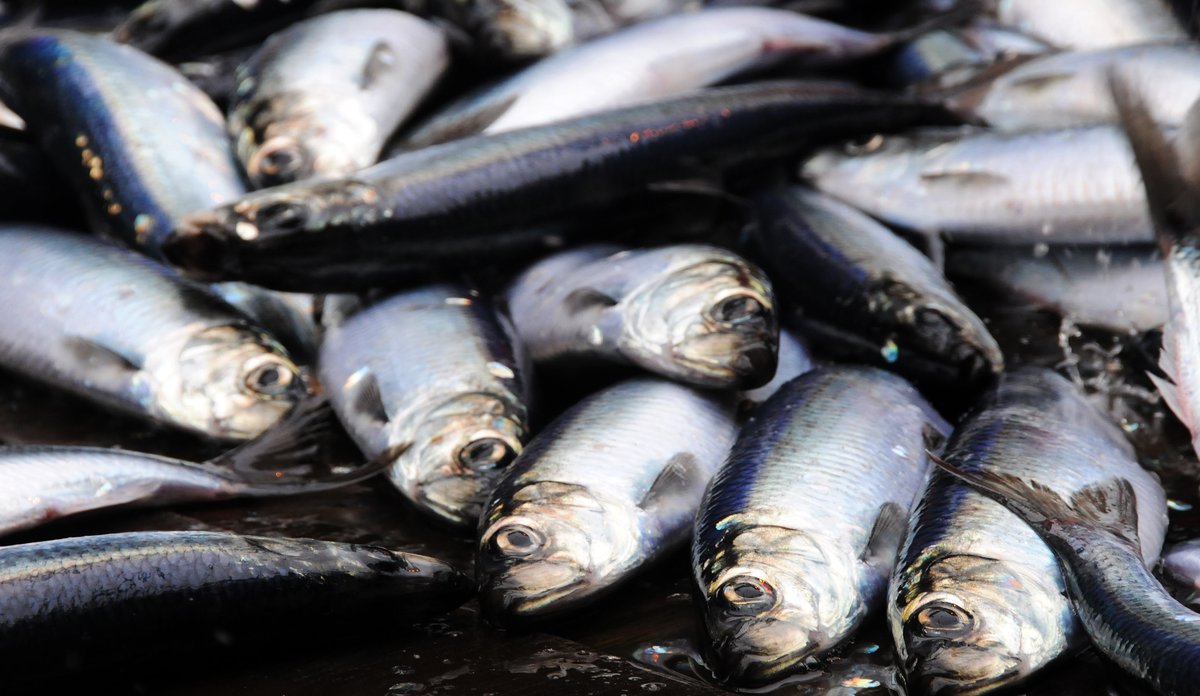 Zero group fish are important consumers on plankton and are prey of other predators, and, therefore, are important for transfer of energy between trophic levels in the ecosystem. Estimated total biomass of 0-group fish species (cod, haddock, herring, capelin, polar cod, and redfish) was 1.92 million tonnes during August-September 2017; slightly above the long term mean of 1.76 million tonnes (Fig 3.5.1). Biomass was dominated by cod and haddock, and mostly distributed in central and northern-central parts of the Barents Sea.

Capelin, polar cod, young herring, and blue whiting constitute the bulk of pelagic fish biomass in the Barents Sea. Note that the acoustic target strength for blue whiting has been changed recently, and the time series has been recalculated. Total biomass of the main pelagic species (age 1 and older fish) in the Barents Sea in 1986-2017 has fluctuated between 0.5 and 9 million tonnes; mainly driven by fluctuations of the capelin stock. In 2017, cumulative biomass of capelin, herring, polar cod, and blue whiting was close to the long-term mean (Fig. 3.5.2). 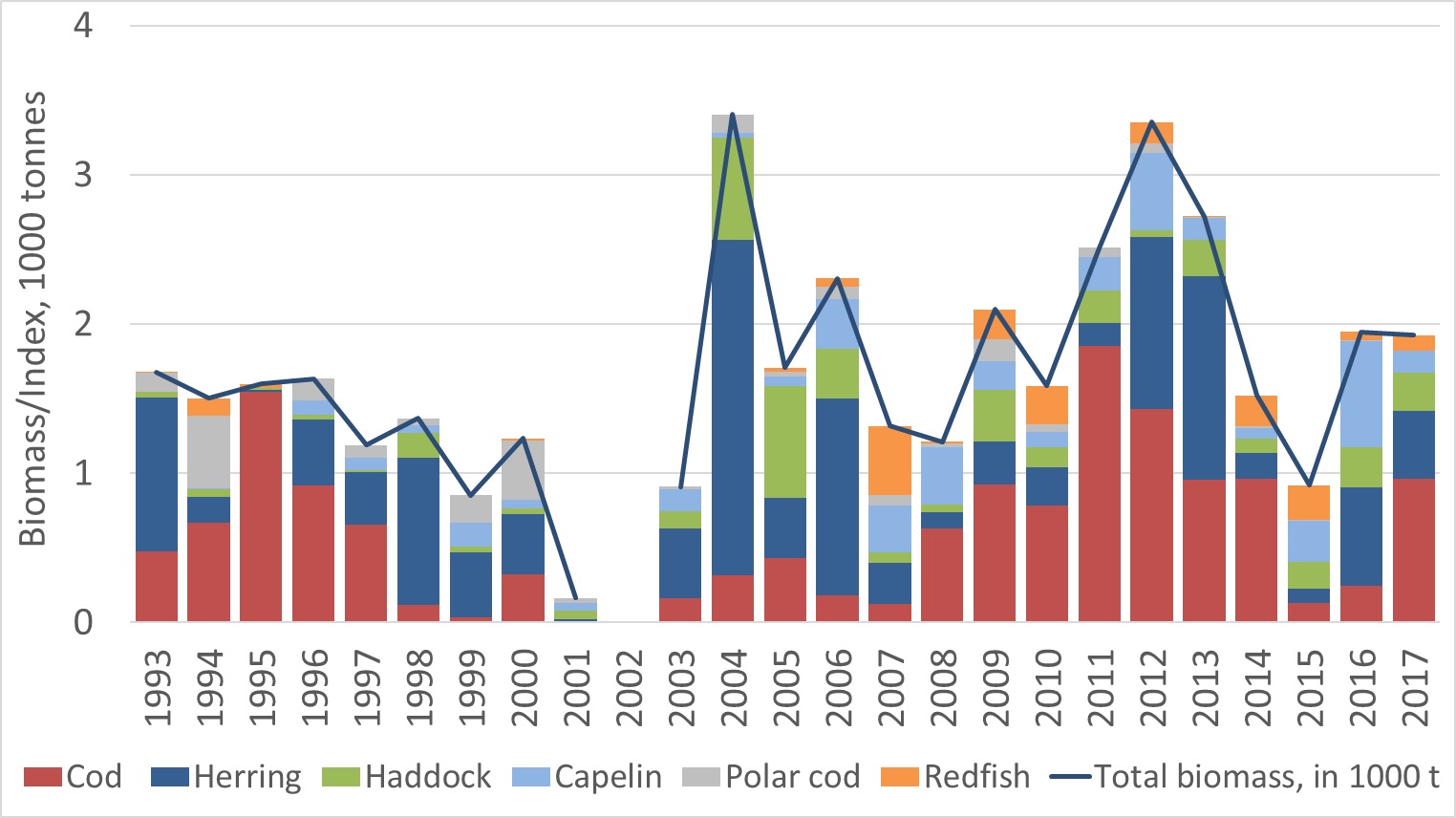 Capelin, young herring, and polar cod constitute the bulk of pelagic fish biomass in the Barents Sea. In some years (e.g. 2004-2007 and 2015-2016), blue whiting (Micromesistius poutassou) also have had relatively high biomass in the western Barents Sea (east of the continental slope). Total biomass of the main pelagic species during 1986-2017 has fluctuated between 0.5 and 9 million tonnes; mainly driven by fluctuations in the capelin stock. In 2017 the cumulative biomass of capelin, herring, polar cod, and blue whiting was close to the long- term mean (Fig. 3.5.2). 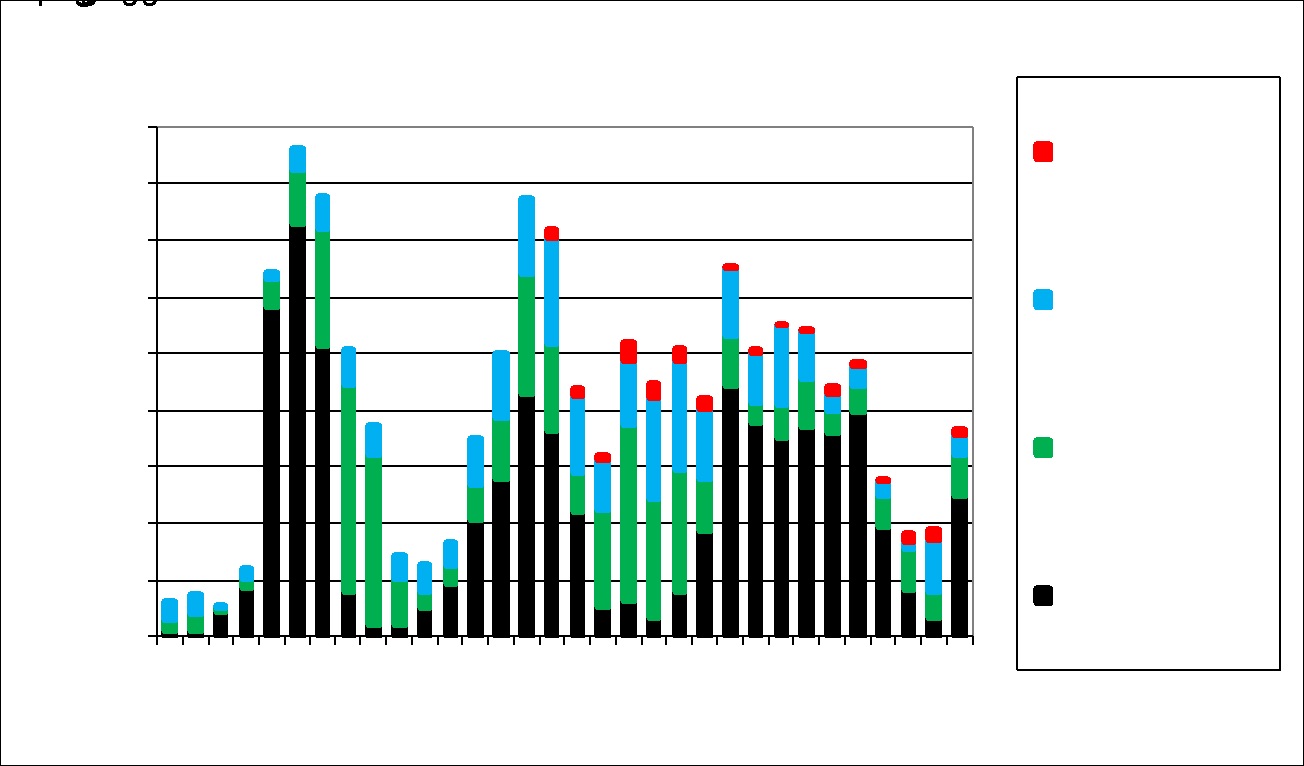 As in 2016, 0-group capelin was distributed widely in the Barents Sea with dense concentrations in north-central Barents Sea. High densities of 0-group capelin were observed in the south-eastern Barents Sea. This survey area was not completely covered; therefore, the 0-group abundance index is underestimated. Average fish length was 5.4 cm; close to the 2016 estimate, and larger than the long-term mean (1980-2017). The relatively large size of 0-group capelin likely indicates suitable living conditions during summer, and increases the likelihood of survival through the winter. Capelin length varied from 2 to 7.4 cm; however, the length of most (85%) individuals was between 4.0 and 6.4 cm. The abundance index of 0-group capelin in 2017 was below the long-term mean (Fig. 3.5.3). 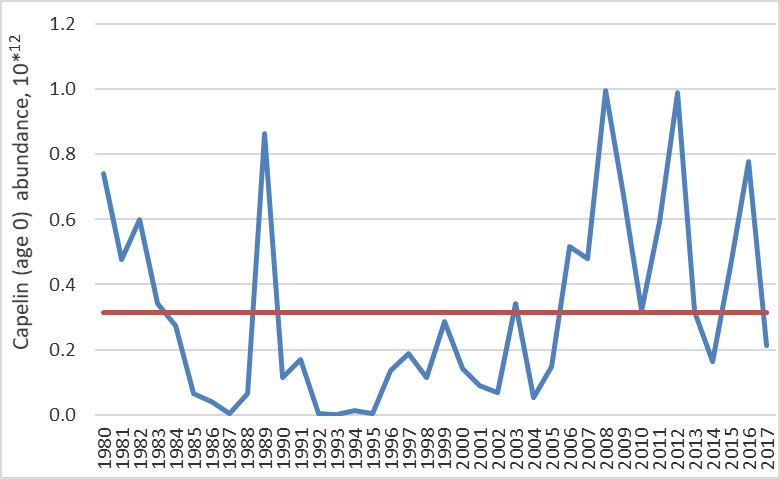 In light of 2017 survey results, the survey results from 2016 become questionable. In 2017, the 2015-year class was estimated to be 4 times as abundant (Fig. 3.5.5), and the 2014-year class twice as abundant as was estimated in 2016. This indicates a significant underestimation of the capelin stock based on 2016 survey data, or a major overestimation in 2017. The 2017 survey was considered an improvement over that in 2016, in terms of both: synopticity between the various ships taking part; and density of coverage in the main area of distribution. Consequently, it is considered more likely that the stock was underestimated in 2016 than that it was overestimated in 2017. 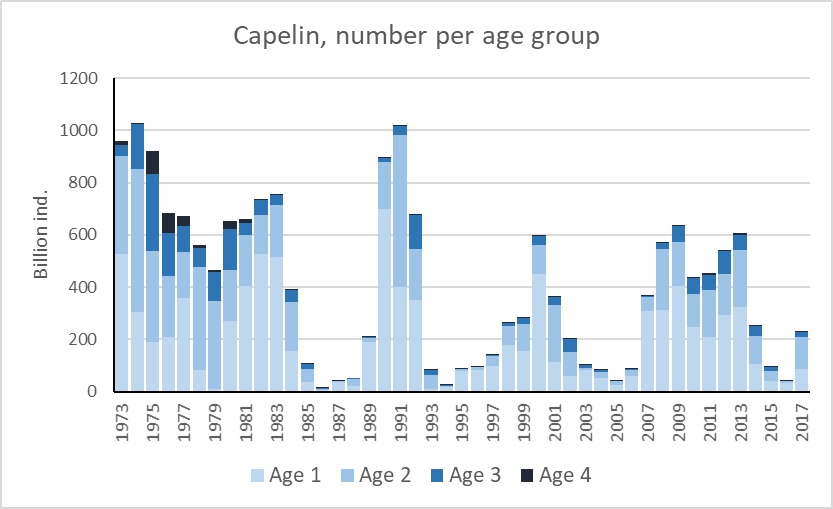 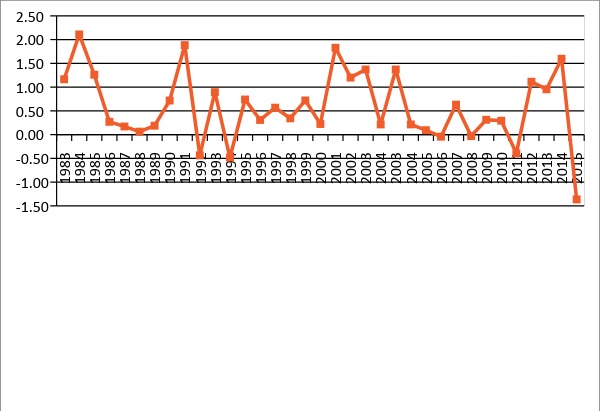 Underestimation of the capelin stock in 2016 is being investigated. Among the reasons suggested are: misidentification of acoustic recordings; and that the survey was carried out in the opposite direction in 2016; north-south whereas south-north is standard. Measures have been taken avoid this situation in future surveys. It should be noted that in 2017 the main capelin area was covered with cruise tracks twice as dense as normal. In addition, acoustic and trawl data from 2016 will be further examined; this work is to be presented at the Russian-Norwegian Symposium in June 2018.

The geographic distribution of capelin density in 2017 is shown in Figure 3.5.7. The distribution was much wider than in 2016, and almost as extensive as in 2013; the year with widest observed capelin distribution. Capelin schools were recorded up to 81°30 N between Svalbard and Franz Josef Land. The majority of capelin was found southeast of the King Karls Land. Mature capelin were also observed in small numbers in the bottom layer at a significant proportion of the survey area. Young capelin (1-year-olds) were mainly observed in the western part of survey area.

Average length of capelin in 2017 was 12.8 cm; average weight was 11.03 g. Compared to 2016, average fish weight for ages 2 and 3 (the main age groups in the stock) decreased slightly, remaining above the average level. For ages 1 and 4, the increasing trend in weight at age continued, as discussed in the interactions section.

Dynamics of changes in average weight-at-age reflect the capelin feeding conditions during the summer-autumn period. These conditions are determined not only by the stock size, but also by the state of the plankton community in the Barents Sea. It can assumed that in 2017 the food base for capelin (number and species composition of zooplankton) was favourable. 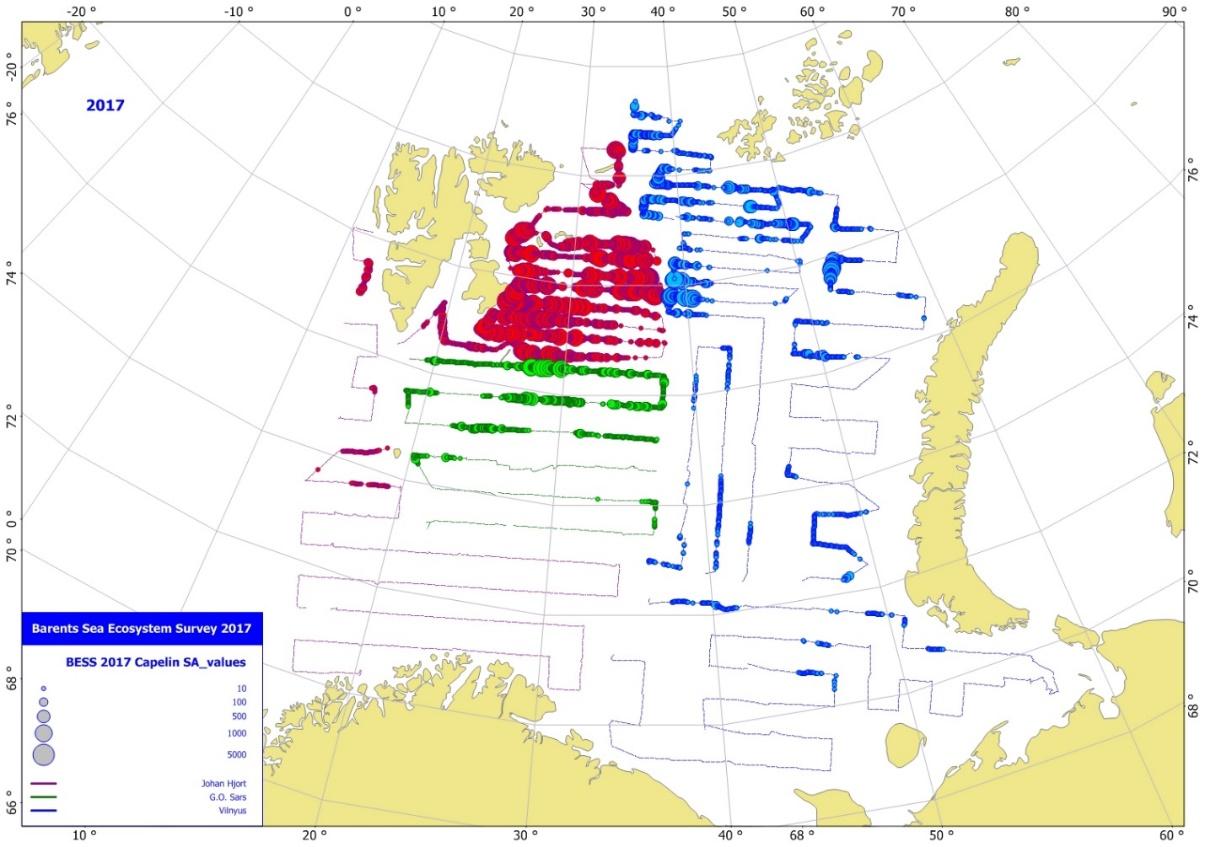 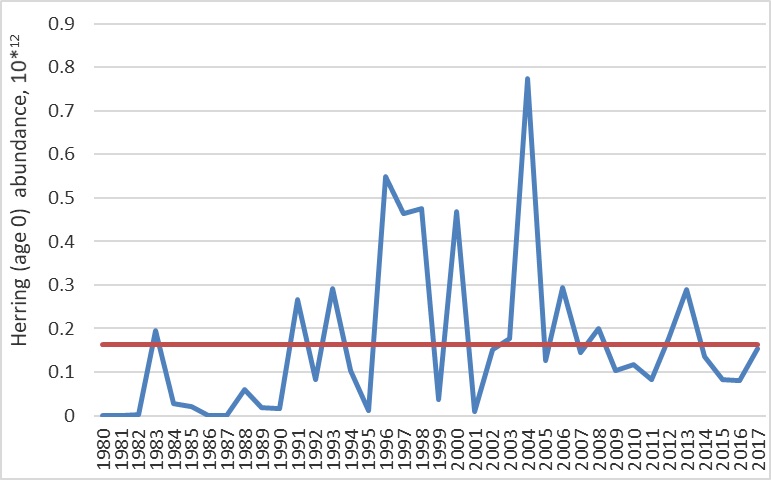 Figure 3.5.10 shows herring distribution in 2017 with highest amounts in the southern Barents Sea. 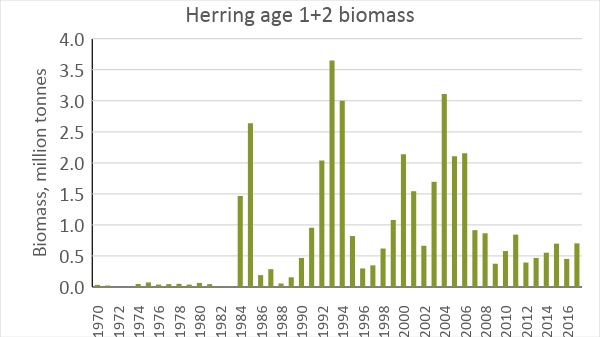 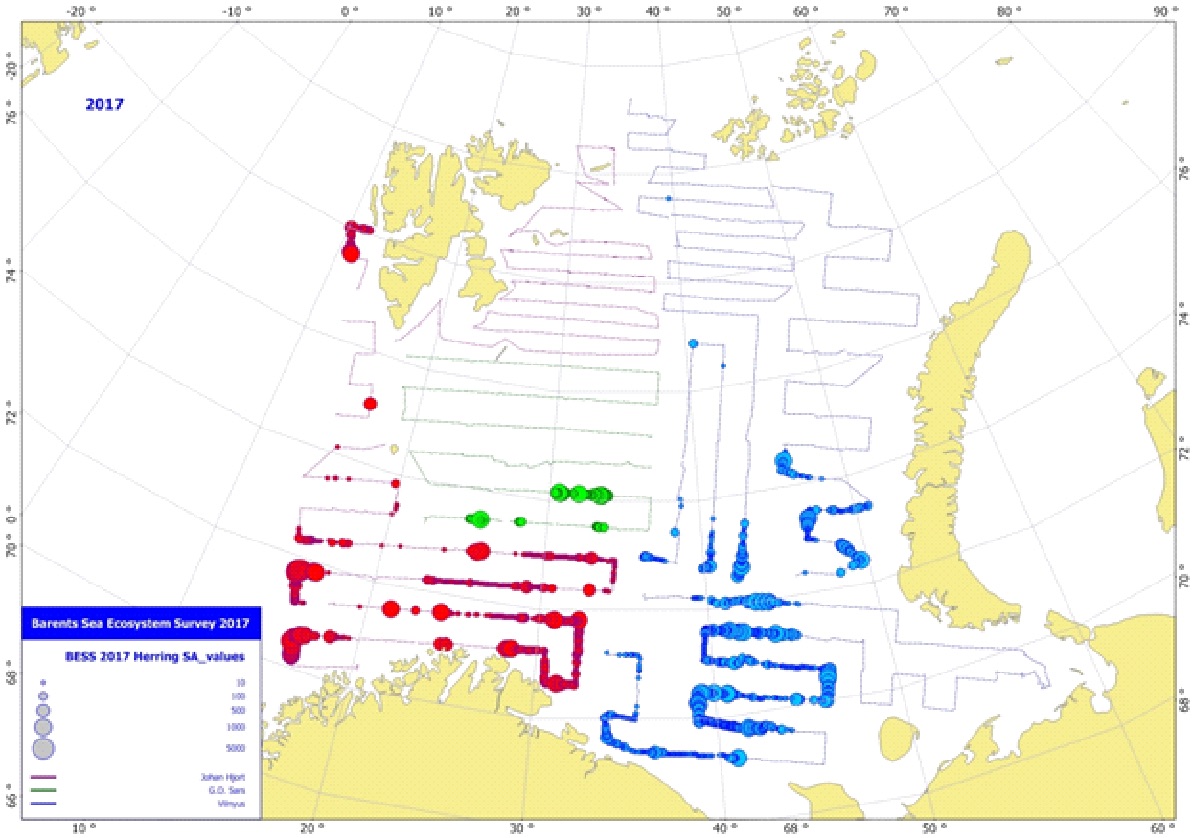 Polar cod is a true Arctic species with a circumpolar distribution. Traditionally, the world’s largest population of this species has been found in the Barents Sea. 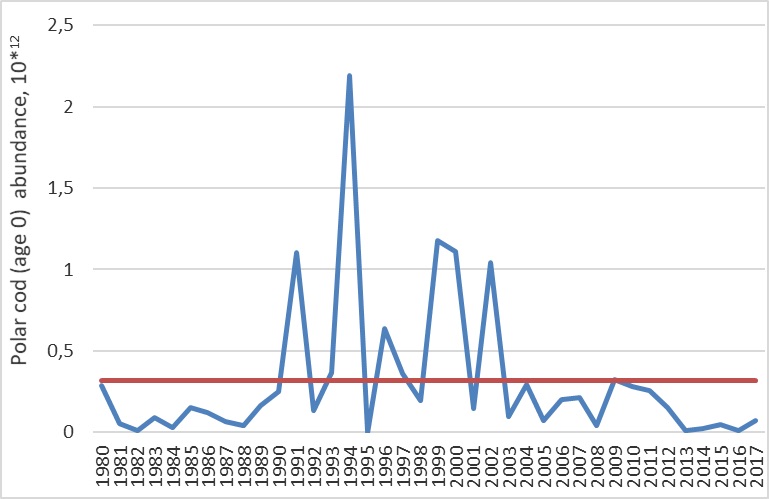 In 2017, as in previous years, distribution of 0-group polar cod was split into two components: western (around Svalbard-Spitsbergen); and eastern (off the western coast of Novaya Zemlya). The eastern component is usually distributed along the south-western coast of Novaya Zemlya; in 2017, however, part of the area west of Novaya Zemlya was not covered by the survey. Thus, 2017 distribution and abundance indices are likely underestimated due to lack of complete coverage. The length of polar cod varied between 2 and 7.4 cm, and most were between 4.0 and 5.9 cm. The mean length of 0-group polar cod (5.0 cm) was higher than the long-term mean (4.1 cm). The abundance index for the western component was lower than in 2016; approximately 1/8th of the long-term mean. Estimated biomass for 0-group polar cod was only 4 thousand tonnes; 1/24th of the long-term mean (Fig. 3.5.11). Abundance indices of 0-group polar cod have been extremely low for several years; indicating a lack of spawning success and/or that a large proportion of the 0-group are distributed outside the standard survey area.

According to the 2016 BESS, there was a significant increase in the number of polar cod in 2016. However, the dramatic decline stock in 2017 cast doubt as to the quality of the 2016 survey. Accordingly, acoustic and trawl data from 2016 will be further investigated, and this work presented at the Russian-Norwegian Symposium in June 2018.

As in previous years, the main concentrations of polar cod were found in the north-eastern parts of the survey area, north of 78°N (Fig. 3.5.13). Scattered concentrations were observed along the southern coast of Novaya Zemlya and near the Svalbard (Spitsbergen) archipelago. 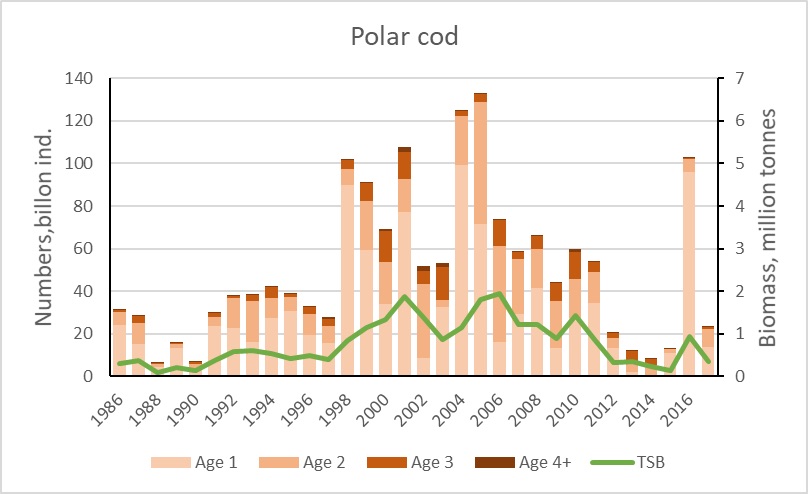 Figure 3.5.12. Total abundance in billions (coloured bars and left axis), and biomass (green line and right axis) of polar cod in the Barents Sea (acoustic survey and BESS data), August-September 1986– 2017. (2003 numbers based on VPA due to poor coverage in survey). 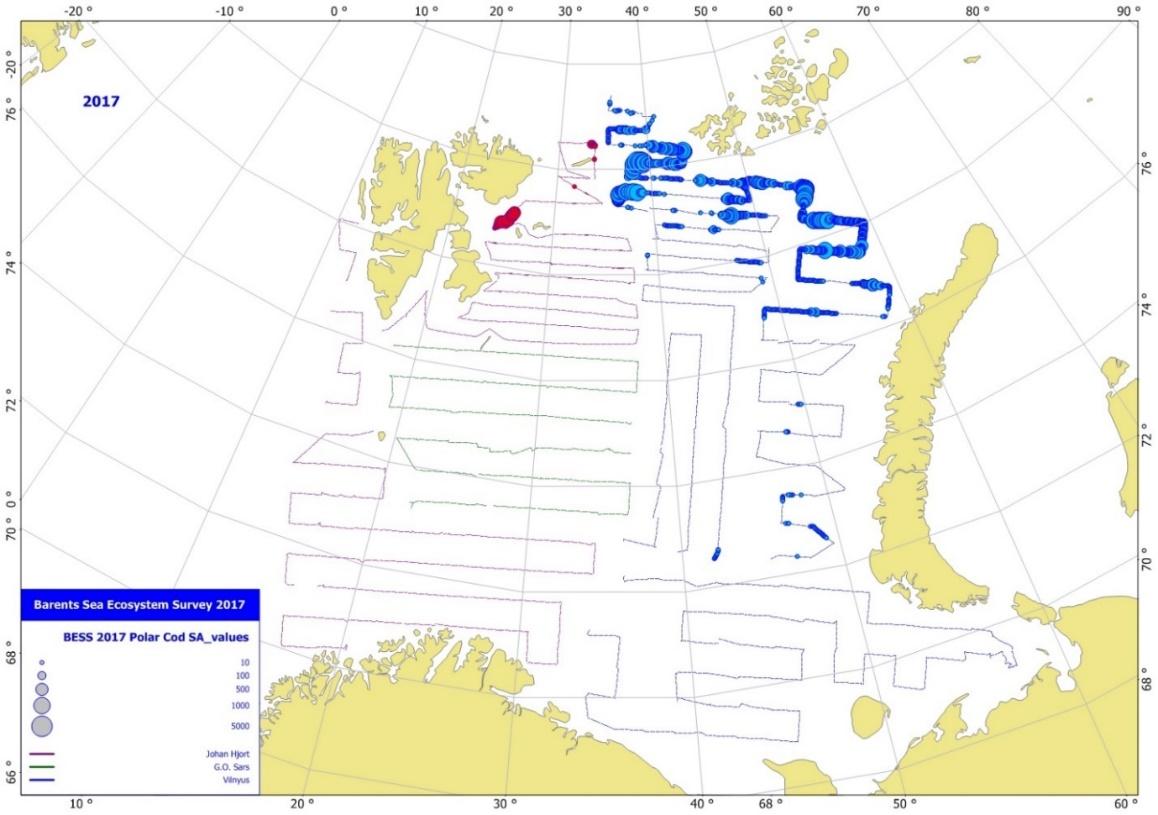 Acoustic estimates of the Barents Sea blue whiting stock have been made since 2004. After 2017 the BESS data time series was recalculated applying a new target strength equation (Pedersen et al., 2011), and a standardized area; this resulted in an overall reduction in estimated biomass to about 1/3rd of previous estimates. During 2004-2007, estimated biomass of blue whiting in the Barents Sea was >200 000 tonnes (Fig. 3.5.14), but decreased abruptly in 2008 and stayed low until 2012; after which time it has been variable. In 2017, blue whiting biomass was estimated at about 115 000 tonnes; a decrease from 2016 (Fig. 3.5.14). Blue whiting migrate from the Norwegian Sea into deeper parts of the Barents Sea (Fig. 3.5.15) when the stock is large and when sea temperatures are high. 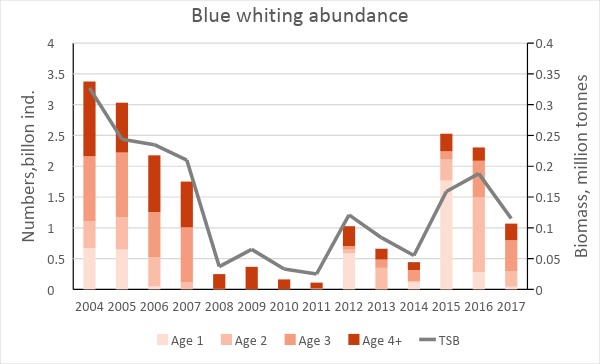 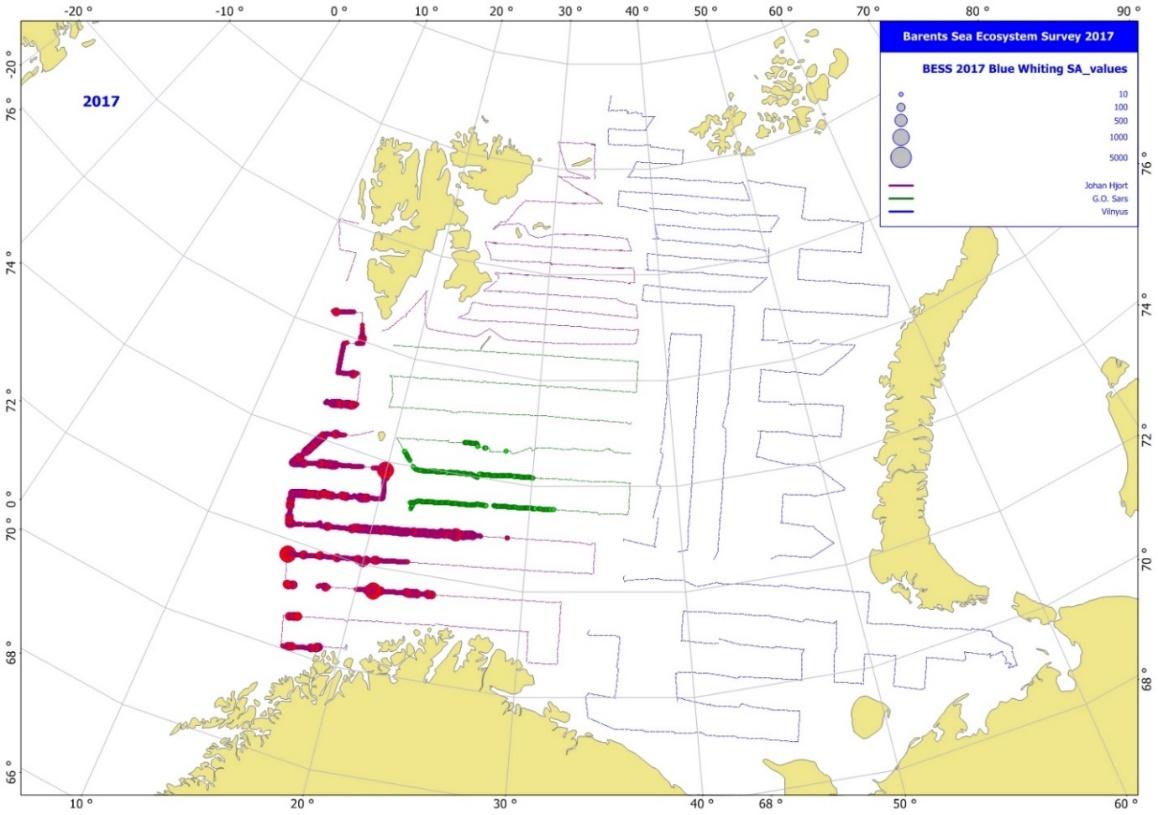