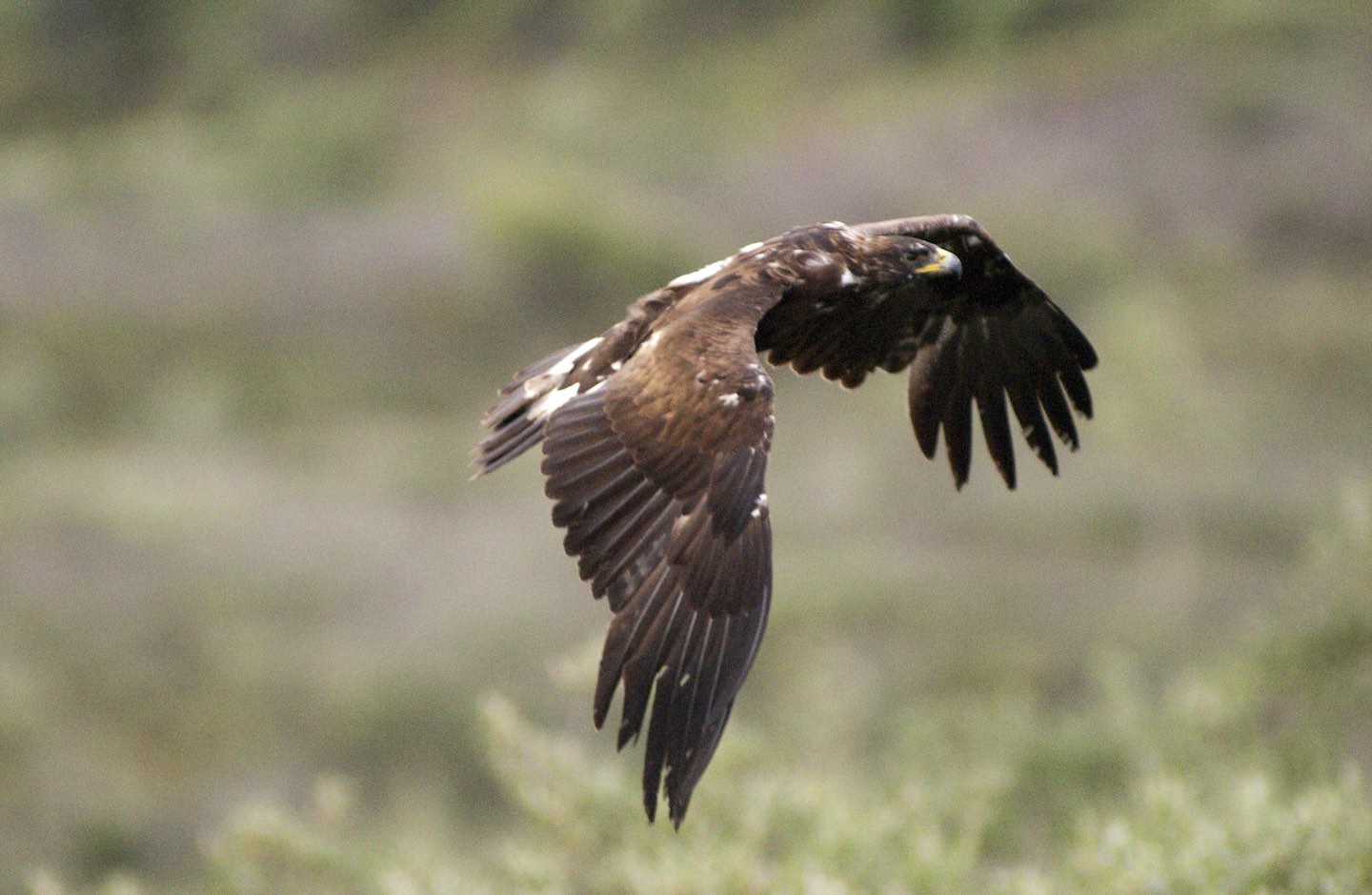 The Golden Eagle is a large, harmonious and powerful eagle with protruding head, long tail and noticeable bill. The body is 80–90 cm long and the wingspan 190–230 cm. The weight ranges from 3 to 6.5 kg, female being heavier than male as in other diurnal raptors. Adult is almost uniformly dark brown with yellowish crown and hindneck. Sexes have similar plumage. Juveniles have strikingly white panels along the centre of the wing and in the base of the

tail; these white areas diminishusually during the next five years. In the sky The Golden Eagle soars long periods on wings held in shallow V position.

The breeding range of the Golden Eagle includes Fenno-Scandia except major parts of southern Sweden and Finland, as well as the Russian tundra east of the Kanin Peninsula (Tucker & Heath 1994, Watson 2010, BirdLife International 2014). In Norway it is absent only in southeast. In Sweden small distinct populations live also on the island of Gotland and in a few small areas in southern mainland, in Finland scattered pairs breed in western and eastern parts of the country, too. In Russia the species is distributed all along the boreal coniferous zone. Globally the breeding range extends over vast areas across the Holarctic, most uniformly in eastern Palaearctic and in western North America. During wintertime especially juveniles and immature birds wander south of the breeding range.

The majority of the Golden Eagles live throughout the year in remote areas far from human habitation due to century-long persecution. Most of the breeding range is covered by boreal forest fragmented by pine peat bogs and wetlands, mountain slopes, alpine heath and tundra edges. In coastal areas of the Barents region the Golden Eagle inhabits non-forested landscapes, too. The necessary habitat requirements include a secure cliff-ledge or large tree for nesting, as well as an extensive peatland, wetland, alpine heath, cliff area or other open terrain for hunting. In wintertime juvenile and immature birds may hunt more openly than adults in half-open landscapes, including distant agricultural landscapes free of human disturbance.

Breeding adults are normally long-lived (up to over 30 years) and live sedentarily within a typical home range from 150 to 300 km2 (eg. Ollila & Koskimies 2008), but during the coldest and snowiest mid-winters with exceptionally low hare and grouse densities they may be obliged to move up to hundreds of kilometres towards south or more productive coastal areas. Most non-territorial eagles migrate in a more regular manner hundreds of kilometres southwards or to coastal regions with a more diverse prey availability, the longer the younger they are (Watson 2010). Eagles remain faithful for their nest-sites and mates throughout their lives. They do not breed until they are at least 4–5 years old. The Golden Eagle breeds on a steep cliff in mountain and coastal areas, and in a tree (usually large pine) in lowlands lacking abrupt cliffs. The female lays two eggs in March or early April and incubates the eggs for 43–47 days. Usually only one of the two eggs produces a young, which becomes independent after being raised by parents 65–80 days in the nest, and almost as long after fledging. The Golden Eagle is an opportunist predator concentrating in middle-sized mammals and birds (Sulkava et al. 1999, Watson 2010). In winter carcasses of moose, reindeer and other big mammals are important, too. In Finland, a representative part of Fennoscandia, one third of the prey individuals are mountain hares (Lepus timidus), and another third, on average, consist of grouse species, especially Capercaillie (Tetrao urogallus), Black Grouse (Tetrao tetrix) and Willow Grouse (Lagopus lagopus, Sulkava et al. 1999). In Lapland, the proportion of reindeer calfs of all the prey items is less than 10%. The lower the densities of the main prey, the more Golden Eagles have to hunt other mammals and birds.

The global population of the Golden Eagle has been estimated at over 170,000 individuals (BirdLife International 2014). Watson (2010) suggested a figure from 125,000 to 250,000 birds, the upper end of which sounds more reasonable taking into account national breeding population estimates and the large percentage of immature and non-breeding individuals. The European breeding population has recently been estimated at 8400–11 000 pairs (BirdLife International 2004), or after partial revision, 6300–7800 pairs (Watson 2010) which is slightly too low in light of the newest national estimates. The breeding population in Norway is estimated at ca. 1,200–1,550 pairs (Heggøy & Øien 2014), in Sweden 585–805 pairs (Ottosson et al. 2012), and in Finland 430–460 pairs (Ollila & Koskimies 2008). In Russia regional populations are not well known, but the total estimate for the European part is 500–1,000 pairs (BirdLife International 2004). The average breeding density of the species in Russian Karelia should be of the same order than in Finland. The wintering population in Finland has been estimated at 2,000–4,000 eagles(Koskimies 2014), and that of Scandinavia probably about 7,000–12,000 birds. The number of breeding pairs is slightly increasing in Finland and Sweden, and stable in Norway (BirdLife International 2004, Ollila & Koskimies 2008, Ottosson et al. 2012). In majority of Europe and other part of the world Golden Eagle populations have remained more or less stable from the 1970s.

Intensive forestry and especially felling of old-growth forests, which have provided nest-trees big enough for lowland pairs, has led to declining quality of the habitat, most extensively in Sweden and Finland, but also in northwestern Russia in recent decades. Especially in southern parts of the Swedish and Finnish range the eagles have lost hunting habitats due to large-scale drainage of pine peat bogs and other wetlands. Deliberate persecution of eagles has ceased in most regions after having continued for centuries, although still existing locally e.g. in northern Sweden and in Russia. A number of nesting attempts fail nowadays due to unintentional disturbance by forestry, off-road traffic and various kinds of outdoor activities; disturbance is a major reason for the human-shy Golden Eagle to be not able to expand its range southwards. Collisions against wind farms, power lines, reindeer fences and other structures, are one of the main causes of death especially for the young and inexperienced eagles (Tjernberg & Svensson 2007). New industrial chemicals and their coeffects with older ones may pose a threat to nesting. The climate change, which will lead e.g. to intensified re-growth of shrub, bushes and saplings in open areas, including alpine heath at lower altitudes like Finland, will become a major threat strengthening the effects of the other negative environmental changes already on-going in northern Europe (Huntley et al. 2007). Warmer winters and more rain may have major negative effects also for the northern prey species, especially for the grouse (Tetraonidae) and mountain hares (Lepus timidus). Availability of carcasses has decreased at least in Finland because the reindeer husbandry has been modernized (Ollila & Koskimies 2008).

The Golden Eagle is classified as least concern (LC) both globally and in Europe, as well as in Norway. In Sweden it belongs to near threatened (NT), in Finland vulnerable (VU), and endangered (EN, Leningrad Oblast) or vulnerable (VU) in Russian Karelia and Murmansk region. A conservation status assessment and management recommendations for the Finnish population has been published (Ollila & Koskimies 2008), but no general action plan exists for the whole of northern Europe (but see Whitfield et al. 2008 for Scotland). The most important measures for habitat protection include conservation of old-growth forest stands and large trees, as well as open peat bogs and wetlands. Golden Eagle territories and popular flyways should be taken into account when planning wind-mills, power lines, roads, snowmobile tracks and other infrastructure causing collision and disturbance risk. Winter-time feeding with carcasses may help especially the young birds to survive, and building of artificial nests makes it possible for the eagles to nest in younger forests, too. Habitat use, survival and movements should be studied with highest priority.