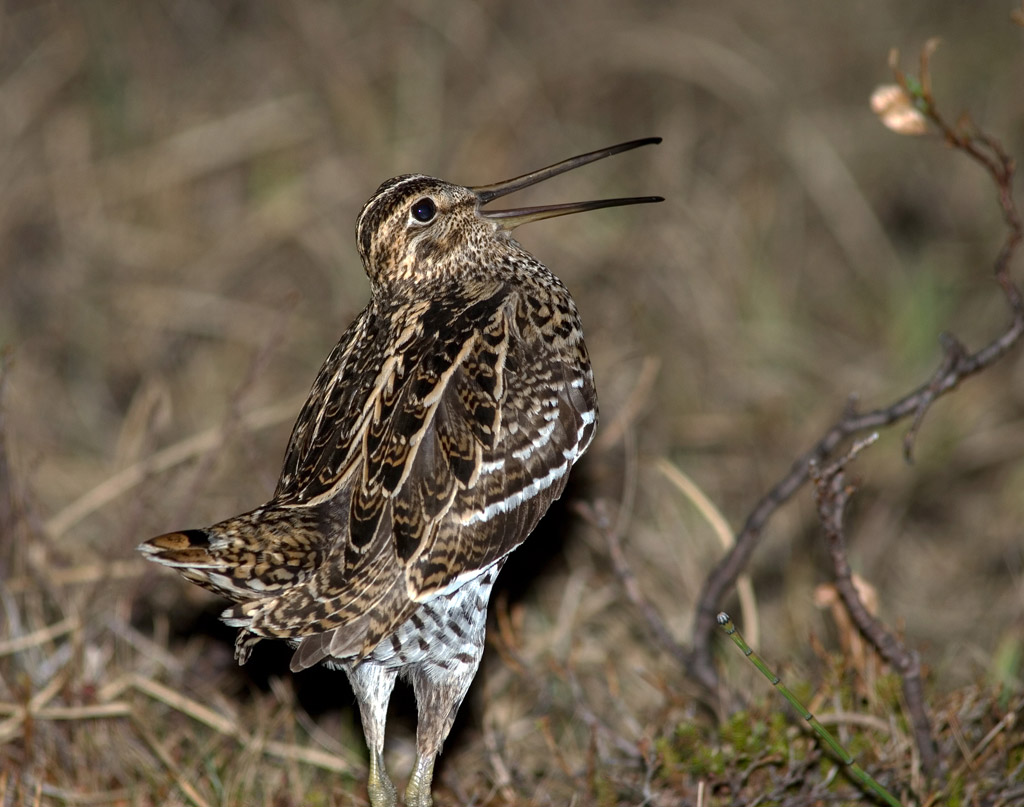 The Great Snipe is a medium-sized (150 g) migratory wader species that breeds in the Barents-region and winters in tropical Africa. It is a lekking species where sexes looks similar, but females are somewhat larger then males. Picture shows a male on a lekking arena in Norway. Differs from sympatric breeding Common snipe (Gallinago gallinago) by larger size and barred underparts.

Breeding in Norway, Sweden, Poland, Estonia, Latvia, Lithuania, Belarus, Ukraine and Russia. Formerly breeding, now extinct, in Finland, Denmark and Germany. Wintering in several countries in central and southern Africa (see Kålås 2004). Breeds in open birch forest and bush areas in alpine and tundra areas in the southern parts of the Barents region from Norway and eastwards to the Ural mountains.

The western population inhabits open and base-rich habitats along the tree line (Kålås et al. 1997b), while the eastern population inhabits floodplains, rich fen and meadows in south, and rich fen and shrub areas northwards into the bush tundra (Kålås et al. 1997a). Do often feed in open bush habitats with sedge and grass, but when the soil becomes dry and the earthworms less active, they have to change to more open fen habitats which are usually more damp. During the lekking period males feed close to the lekking arena, while females, with or without chicks, feed in a more scattered manner (Kålås et al. unpubl.). The same kind of feeding habitats are used during the whole breeding season, both for adults and juveniles. Nests are situated in habitats similar to those used for feeding (Løfaldli et al. 1992).

Birds leave wintering areas from April to May and the southern breeding birds seem to go directly to breeding grounds where lekking starts in late April. The most northern breeding birds probably use more southern/lowland roosting sites while waiting for the breeding areas to become available in early-mid June. Adult birds start leaving their breeding areas in early August, and the juveniles leave in late August/early Sept. During the autumn migration most birds seem to travel quite rapidly back to tropical Africa, with only a few short stopovers along the migration route (Devort & Paloc 1994, but see Meltofte 1993, Klaassen et al. 2011). During the winter most birds stay in central and southern inland Africa. Breeding: A lekking species where males perform a very energetic demanding display in lekking arenas (Höglund et al. 1992) which female visit only to copulate (Höglund & Alatalo 1995). The female alone cares for chicks, feeding them during their first days of life. Their behaviour and habitat use during breeding makes them difficult to detect (Kålås 2000). Clutch size: 4, incubation period: 22-24 days, fledging period: ca. 25 days Survival and Productivity. The annual survival rate for adult birds seems to be relatively high (0.6 – 0.7 for a 1987-96 sample from Norway (Fiske et al. ms)). Production is probably quite variable (20-40 % young recruits in the breeding population in a sample from Norway 1987-01 (Kålås, unpubl.)), probably due to: i) fluctuating predator pressure related to small mammal cycles in the western population and the northern part of the eastern population, and ii) fluctuating weather condition (eg. dry weather makes food less available, flooding may destroy nests) (Kölzsch et al. 2007). Food: Almost entirely invertebrates. In breeding areas the lekking males demand large quantities of high-quality food (Höglund et al. 1992), and earthworms are the main food item, at least for the western population and for the south-western part of the eastern population (Løfaldli et al.1992, Kuresoo & Luigujõe, unpubl.).

The species experienced a dramatic population decline in the period ca.1850 – 1930s, most strongly pronounced in the western part of the breeding range. This was probably due to habitat change brought about by industrial development, changes in agricultural practices and traditional harvesting in lekking arenas (Kålås et al. 1997b). After 1950 the western population, now restricted to areas along the tree line in the Scandinavian mountains, seems to have stabilised, while the population reduction seems to have continued in the eastern range, particularly in the southern and western parts. Finland only have some pairs.