Persistent organic pollutants (POPs) are carbon-based persistent chemicals found in all compartments of the Arctic ecosystem. They mainly originate from industrialized areas further south and are transported to the Arctic by air and ocean currents, rivers and sea ice. In the environment, organisms can accumulate POPs in their tissues that further get transferred and biomagnified through the food web. Due to their toxicity, exposure to high concentrations of POPs is of concern for wildlife’s health.

Species that occupy the top of the food chain often have the highest concentrations of pollutants. In Arctic species, several studies have associated POP levels with harmful effects such as disruptions of hormonal and immune systems, reproduction and DNA damage. To protect human health and wildlife from harmful effects of POPs, a global treaty, the Stockholm Convention (www.pops.int), under United Nations, was initiated in 2001. Several countries agreed to reduce or eliminate the production, use and/or release of 12 initial POPs, the “dirty dozen”. This group consists of pesticides, industrial chemicals and unintentionally produced compounds. Since the treaty was effective in 2004, concentrations of several of the initial POPs have declined in wildlife as a result of the regulations, although some have leveled off in recent years. New chemicals are constantly being produced and some might have the potential to act as POPs, therefore the Stockholm Convention has a scientific review process deciding if chemicals should be regulated. Currently 28 POPs are listed under the convention.

Mercury is a heavy metal also detected at high concentrations in Arctic biota. It is emitted to the environment through natural and anthropogenic sources. In the environment, the fate of mercury depends on chemical, physical and biological factors. Mercury can be transformed to the toxic and bioavailable methylmercury (MeHg) through microbial activity. Adverse health effects in wildlife related to MeHg is well documented and international cooperation to control the release of mercury entered into force through The Minamata Convention on Mercury in 2017.

Climate change may indirectly affect pollutant levels in the Arctic. The observed physical effects of climate change include temperature increase, extreme weather events, increased melting of sea ice and glaciers and effects in ocean currents. The climate-associated changes may alter emission patterns, long-range transport and the fate of POPs and mercury in the environment. When snow and ice melt, pollutants accumulated over decades are redistributed into the environment and are made available for uptake in wildlife. The Barents Sea is currently facing the most pronounced sea-ice loss within the Arctic which can alter the behavior of ice-dependent species, having consequences for their diet and pollutant exposure. In addition to changing pollutant patterns, the decrease in sea ice gives possibility for increased human activity and local emission of pollutants. Further research on the impact of POPs and mercury should assess the combined impact of changes in Arctic climate and pollutant exposure.

The polar bear Ursus maritimus is a top-predator of the Arctic marine ecosystem and is the largest species of bear in the world. Monitoring of polar bears has shown that they harbor high concentrations of environmental pollutants. The diet of polar bears mostly consists of sea-ice associated seals, like ringed seals Pusa hispida, bearded seals Erignathus barbatus and harp seals Pagophilus groenlandicus. Because polar bears occupy a high position in the food web and their diet is rich in fat, they are exposed to high levels of a wide range of bioaccumulative pollutants.

What are the consequences?

Polar bears exhibit levels of pollutants that put them to risk of adverse health effects. In studies from the Barents Sea current levels have been associated with disruptive effects on concentrations of thyroid hormones, genes involved in fat metabolism, immune system and clinical parameters such as cholesterol and triglycerides. Especially high levels have been found in polar bear cubs which exhibit twice as high concentrations compared to their mothers. The high levels are of concern as they can potentially affect development and have been linked to changes in gene expression associated with energy metabolism.

A decline in sea-ice caused by climate change, limits the access to the polar bears most common prey the ringed seal. It is suggested that the diet of polar bears from the Barents Sea have shifted towards less marine, ice-associated lower trophic level species. Varying food availability makes polar bears rely more on body fat reserves during summer and autumn, resulting in seasonal fluctuations in body condition. As many pollutants are fat-soluble, they are released into the blood stream when fat reserves are used. This makes many pollutants accessible for uptake in vital organs such as the liver and brain. Correlative and mechanistic in vitro studies suggest that the current pollutant exposure in polar bears from the Barents Sea may affect their health. Pollutant levels in Barents Sea polar bears are however lower than threshold levels of effects defined by AMAP. These contradicting results show that it is difficult to define threshold levels for polar bears.

Pollutants in polar bears from the Barents Sea are dominated by fat-soluble organic pollutants in fat tissue and poly- and perfluorinated compounds (PFASs) in plasma. Of the fat-soluble organic pollutants, the most abundant compounds are polychlorinated biphenyls (PCBs) and organochlorine pesticides (OCPs) including dichlorodiphenyldichloroethane (DDTs), chlordanes (CHLs), hexachlorocyclohexane (HCH) and hexachlorobenzene (HCB). They were widely used after the second world war in various industrial and agricultural applications. Many of them have had a decreasing trend in the environment since the 1990s as a result of restrictions and bans in production and use by international regulations such as the Stockholm Convention. Current used chemicals like phthalates and their metabolites are found at low concentrations in polar bears.

Temporal trends of PCBs have showed an annual decrease of 7% between 1997 and 2020 in the Barents Sea polar bears. Dichlorodiphenyldichloroethylene (DDE), a metabolite of DDT, had declined by trend by 8% per year until 2012 and increased then annually by 12% until 2020. The reason for the increase is unknown but might be related to secondary emissions driven by climate change like increased melting of snow and ice that release previously stored pollutants. Similarly, HCB decreased by 9% per year until 2009 and have remained stable since. Β-HCH and oxychlordane have had an annual decrease of 3% and 9% from 1997 to 2020, respectively. Trans-nonachlor, a bioaccumulative component of the pesticide chlordane, have decreased annually by 8% between 1997 and 2020. 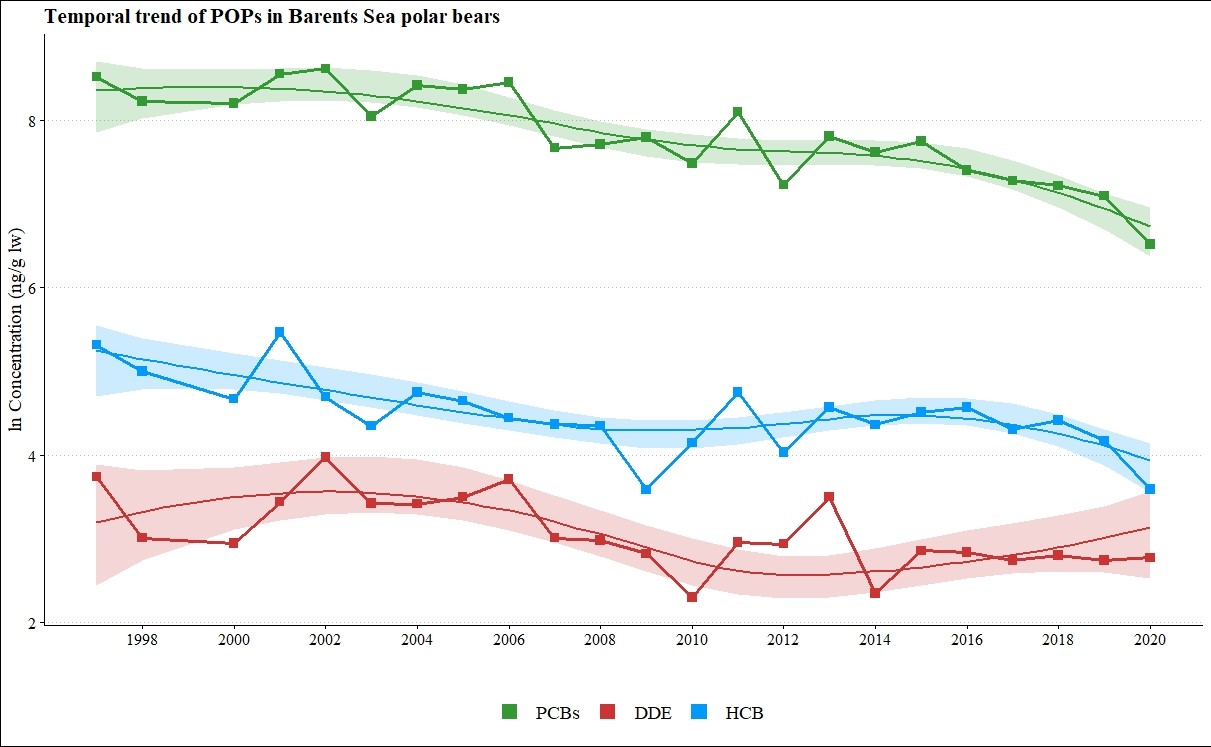 Figure 1: Levels of PCBs (PCB-118, 138,153, 180), DDE and HCB measured in blood plasma of adult female polar bears in Svalbard in the period 1997 to 2020. Concentrations are given as log transformed geometric means and partial residuals from generalized additive mixed models with 95% confidence interval given in ng/g lipid weight. Models were adjusted for the effect of recaptured individuals.

Polybrominated diphenyl ethers (PBDEs) were widely used as flame retardants to reduce flammability of items and are listed under the Stockholm Convention. Levels of the brominated diphenyl ether BDE-47 decreased annually by 5% between 1997 and 2020 in the Barents Sea polar bears. BDE-153 levels have remained stable between 2000 and 2020.

PFASs have been measured in blood plasma of adult polar bears in Svalbard between 2000 and 2018. Widely used for industrial purposes, PFOS and its precursors were restricted by the Stockholm Convention in 2009 and many related compounds are still proposed for listing. Levels of perfluorooctane sulfonate (PFOS) decreased annually by an average of 9% between 2000 and 2009 before having a stable trend until 2013 and then a decreasing trend until 2018. Perfluorohexanesulfonate (PFHxS) decreased annually by 9% until 2009 and have had a stable trend since. 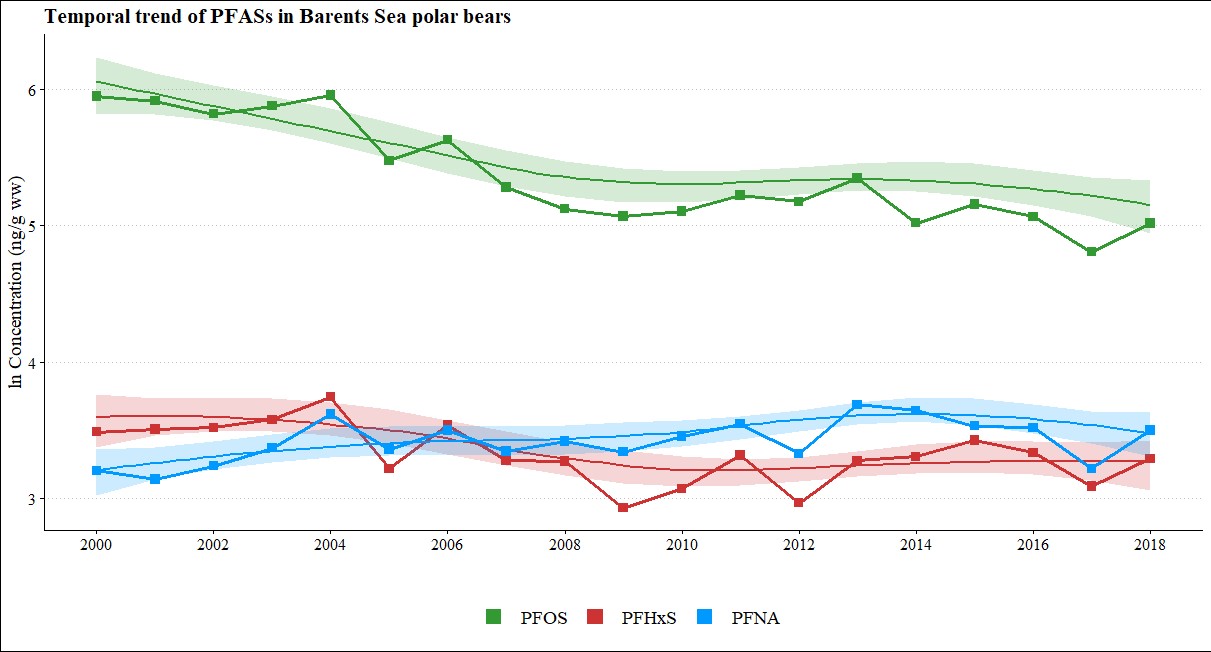 Figure 2: Levels of the PFAS compounds PFOS, PFHxS and PFNA measured in blood plasma of adult female polar bears in Svalbard in the period 2000 to 2018. Concentrations are given as log transformed geometric means and partial residuals from generalized additive mixed models with 95% confidence interval given in ng/g wet weight. Models were adjusted for the effect of recaptured individuals.

Temporal trends of mercury measured from hair of adult female polar bears from Svalbard increased over time, especially during the second half of the study period. Mercury have both natural and anthropogenic sources and in polar bears the neurotoxic and highly bioavailable methylated Hg constitutes most of the total Hg burden. 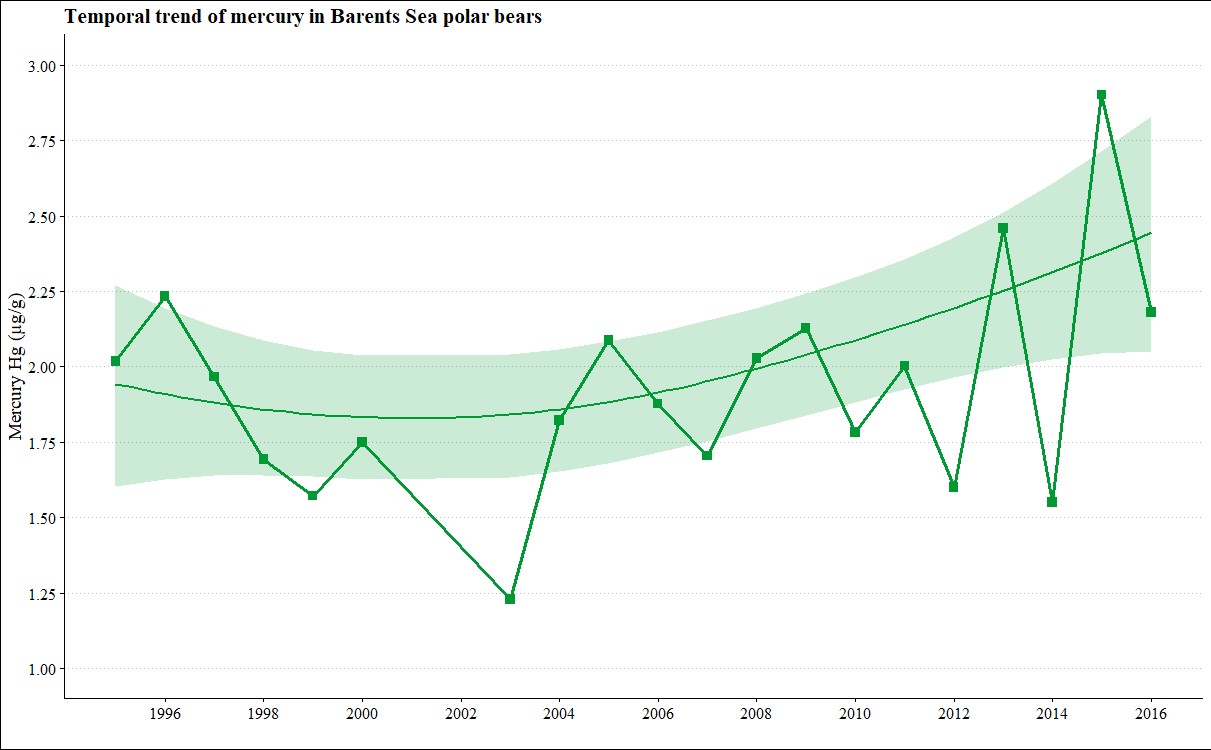 Figure 3: Levels of the mercury (Hg) measured in hair of adult female polar bears in Svalbard during the period 1995 to 2016. Concentrations are given as geometric means and partial residuals from generalized additive mixed models with 95% confidence interval given in µg/g. Models were adjusted for the effect of recaptured individuals.

In the Barents Sea subpopulation, there are two distinct ecotypes of polar bears. During sea ice melt pelagic polar bears follow the sea ice towards the north east Barents Sea, whereas coastal polar bears stay close to Svalbard the entire year. Pelagic polar bears have higher intake of pollutants compared to the coastal ones. This difference is caused by the pelagic bears having a higher consumption of marine prey and occupying a higher trophic level than the coastal bears. They have a higher intake of energy, and thus pollutants, and they feed along the marginal ice zone and closer to emission sources. The blood levels of fat-soluble compounds are similar in both ecotypes, but pelagic bears are fatter than the coastal and the fat-soluble compounds are mainly stored in the fat. PFASs, however, does not bind to fat and are therefore found in higher concentrations in the blood of pelagic polar bears.

The polar bear is being monitored because it is a top predator of the Arctic that accumulates high levels of pollutants. It is classified as vulnerable in IUCN’s Red List of Threatened Species. Climate change may affect polar bears’ exposure to pollutants. Therefore, continued monitoring is necessary to understand the drivers of pollutant concentrations and evaluate effectiveness of global and regional regulations. 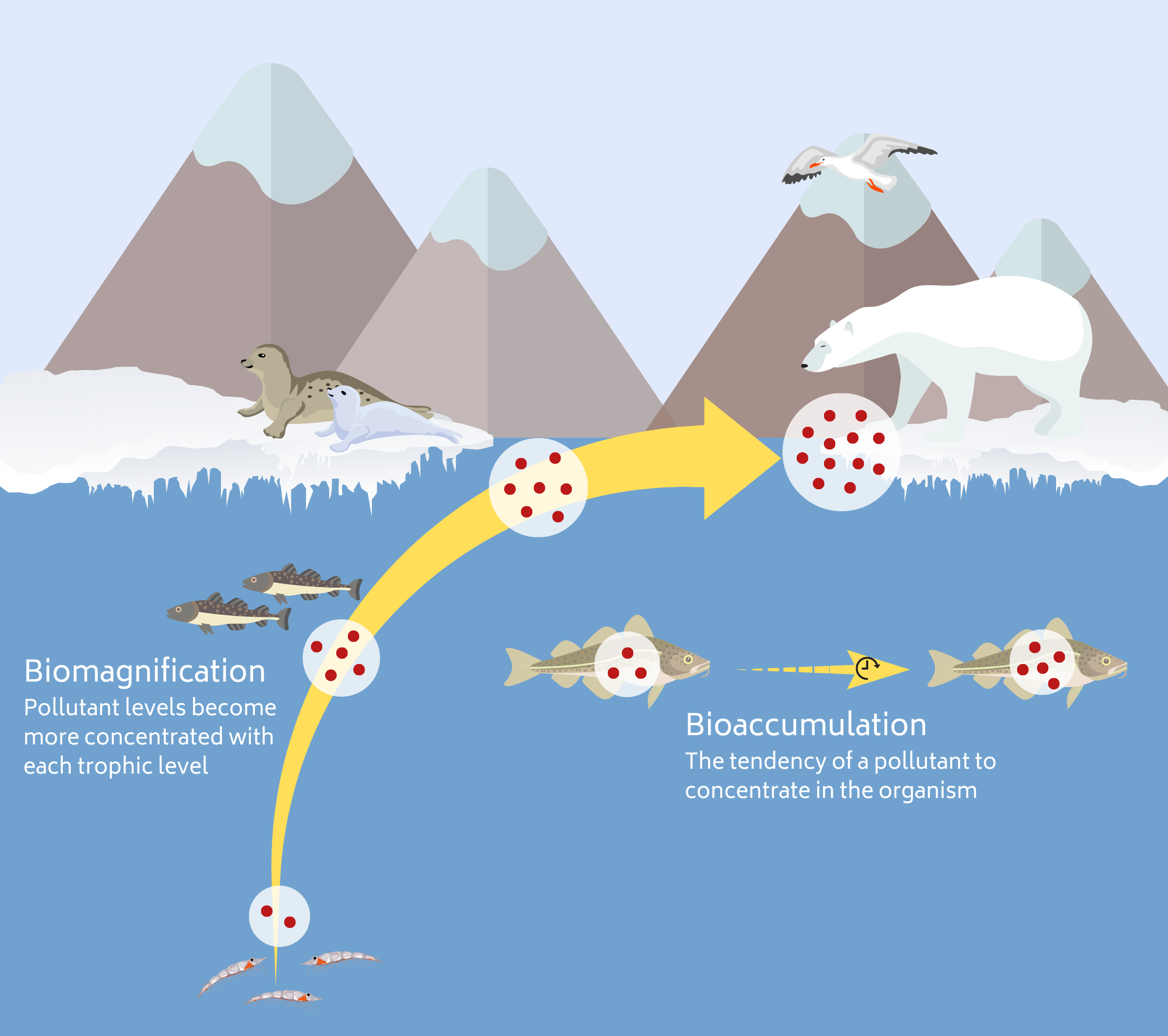