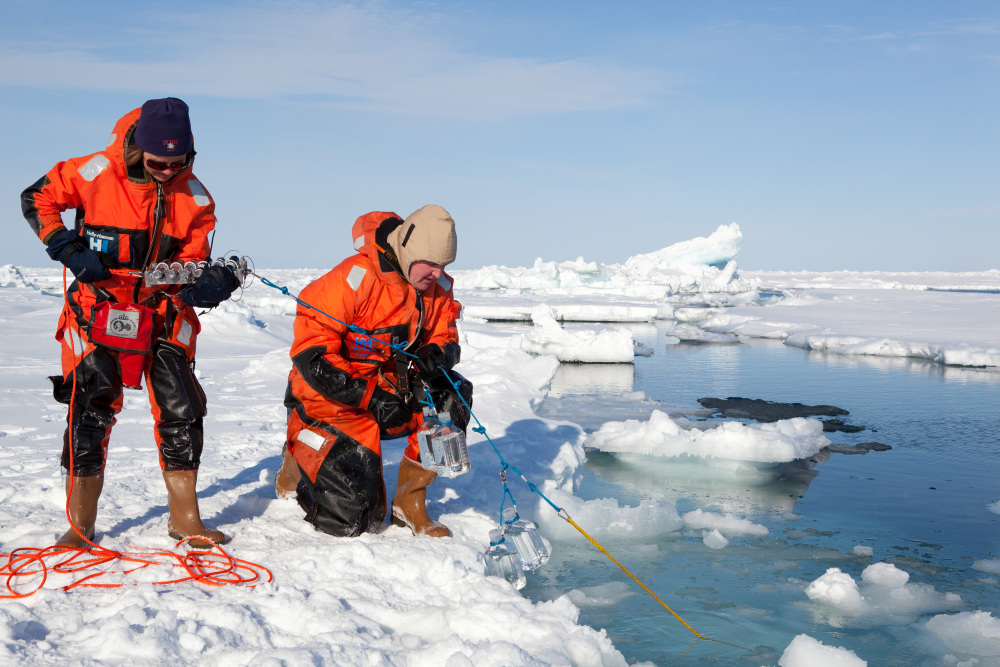 The marginal ice zone is usually limited to a few tens of kilometres, but little data is available to give any definitive indication as to how far in across the drift ice it extends. In addition to seasonal variations, random variations also occur, caused by numerous factors, including wind direction and strength. Changes in spatial distribution can occur within a matter of hours or days. Melting of the sea ice during the spring/summer leads to the creation of a surface layer which is fresher than the arctic water. The thickness of this meltwater layer and the degree of stability between this layer and the underlying water depend on a number of factors, including ice thickness and concentration, rate of melting and the amount of wind-driven mixing which occurs during the melting season. Nutrient salt concentrations vary in the ice and underlying water masses depending on consumption by the primary producers, supply via convection or ocean currents and regeneration (recycling). The greater the stability of the melting layer, the more nutrient supply occurs via regeneration.

There are differences in the type of ice, the properties of the ice, the concentration of ice and the volume of snow on the surface in different areas, which has implications for the quantity and quality of incident light for primary producers and other organisms which live in or adjacent to the sea ice or in the underlying water masses. The phytoplankton bloom in the marginal ice zone will follow the ice as it moves northwards. Modelling results suggest that the majority of phytoplankton production occurs in the marginal ice zone and is significantly reduced when the ice concentration exceeds 80%, in the first instance due to the limitation of light linked to both ice thickness and the volume of snow on the ice. As the ice melts and becomes thinner, the bloom can also continue north of the marginal ice zone. However, there is considerable spatial variation in the amount of phytoplankton production, as well as variation between years. In relative terms, ice algae in or on the underside of the ice also contribute more to overall primary production further north and in areas with multiannual ice than areas with younger ice, where a higher proportion of primary production takes place in the water masses. The ice algae bloom starts earlier than the phytoplankton bloom, thereby extending the productive season in the area. However, thin and dynamic ice will generally enable phytoplankton blooms to exist beneath the ice, as is now being reported from a number of arctic areas, including north of Svalbard.

Benthic organisms in the Barents Sea show a clear biogeographical pattern where the species have clear preferences as regards depth, temperature, salinity, sediment characteristics, current conditions and the degree of ice cover. In deep areas of the marginal ice zone, the benthic community prefers low and stable temperatures, while in shallow areas, the benthic communities range from having a broad thermotolerance to having a narrow cold tolerance. However, due to the high species and functional complexity of the benthic fauna community, and the differences between shallow banks, the depth gradients of the seabed, and the deep soft-bottom plains of the Barents Sea, it is impossible to provide a comprehensive answer as regards the value of the marginal ice zone.

Several seal species use the ice as a pupping, moulting and resting area, but the importance of the marginal ice zone varies between species and through the year. Walrus, for example, give birth deep inside the ice, primarily on the eastern side of Svalbard and over towards Franz Josef Land, while harbour seal on the western side of Spitsbergen can use the very outermost part of the drift ice as a resting platform, particularly during the winter. Furthermore, species which graze on the seabed (walrus and bearded seal) also depend on the sea ice being located above shallow waters. Bowhead whale, beluga whale and narwhal are the only whale species adapted to life in areas with ice all year round. In addition, baleen whales (blue whale, fin whale, humpback whale and minke whale) and toothed whales (orca) forage along the ice margin during the summer months. However, more knowledge is needed concerning the importance of the marginal ice zone for different marine mammals during all seasons, as well as the responses of different species to changes in ice conditions.

The quality of food, rather than simply the quantity of food available, is a decisive factor in determining ecosystem condition. Several thousand species spread across many different groups of species occur in and around the ice, in the water masses or on the seabed. Species composition and the numbers of different species and/or species groups also vary through the year and between years. Although the species may share the same habitat, they can occupy different trophic niches and have different diets. There is a general need for a greater understanding of ecosystem interactions and processes in the marginal ice zone.

In addition to research, this presupposes a stronger focus on species composition, including that at lower trophic levels in the monitoring, more time series for population size and habitat use, and the monitoring of ecosystem components and processes in the marginal ice zone through the year. The most important changes in marine ecosystems, which also have an impact on the nutrient situation for many species which are found in the marginal ice zone, are likely to be climate change, changes in fisheries and fluctuations in pelagic fish stocks. Most of these factors act over a wider geographic area than the marginal ice zone as defined in this report. Changes as regards the timing of sea ice formation and melting, the distance of the marginal ice zone to land, as well as the amount and properties of the ice impact on production conditions and species composition in the marginal ice zone. Alongside altered ice conditions, temperature changes in the water masses will also lead to the displacement of species, changes in competition and an increase in the likelihood of the introduction of diseases, disease carriers and parasites against which arctic species are unlikely to have any defence. Fishing is also moving north- and eastwards as the ice distribution changes.

An increase in fisheries activity is anticipated, particularly in an area north of Kong Karls Land and north towards Kvitøya, i.e. in an area where there has previously been little fishing. Bottom trawling impacts on bottom habitats and benthic fauna. In addition, many of the species in the marginal ice zone are apex predators and have a varying ability to break down pollutants. Pollutants and plastics can be incorporated into the ice and released when the ice melts, with the consequence that organisms associated with the ice are exposed to these compounds when the ice melts. The impact of shipping and petroleum activity is currently considered to be small, but if an acute oil spill were to reach the marginal ice zone, there could be major local consequences, depending on the scope, type of spill and time of year.