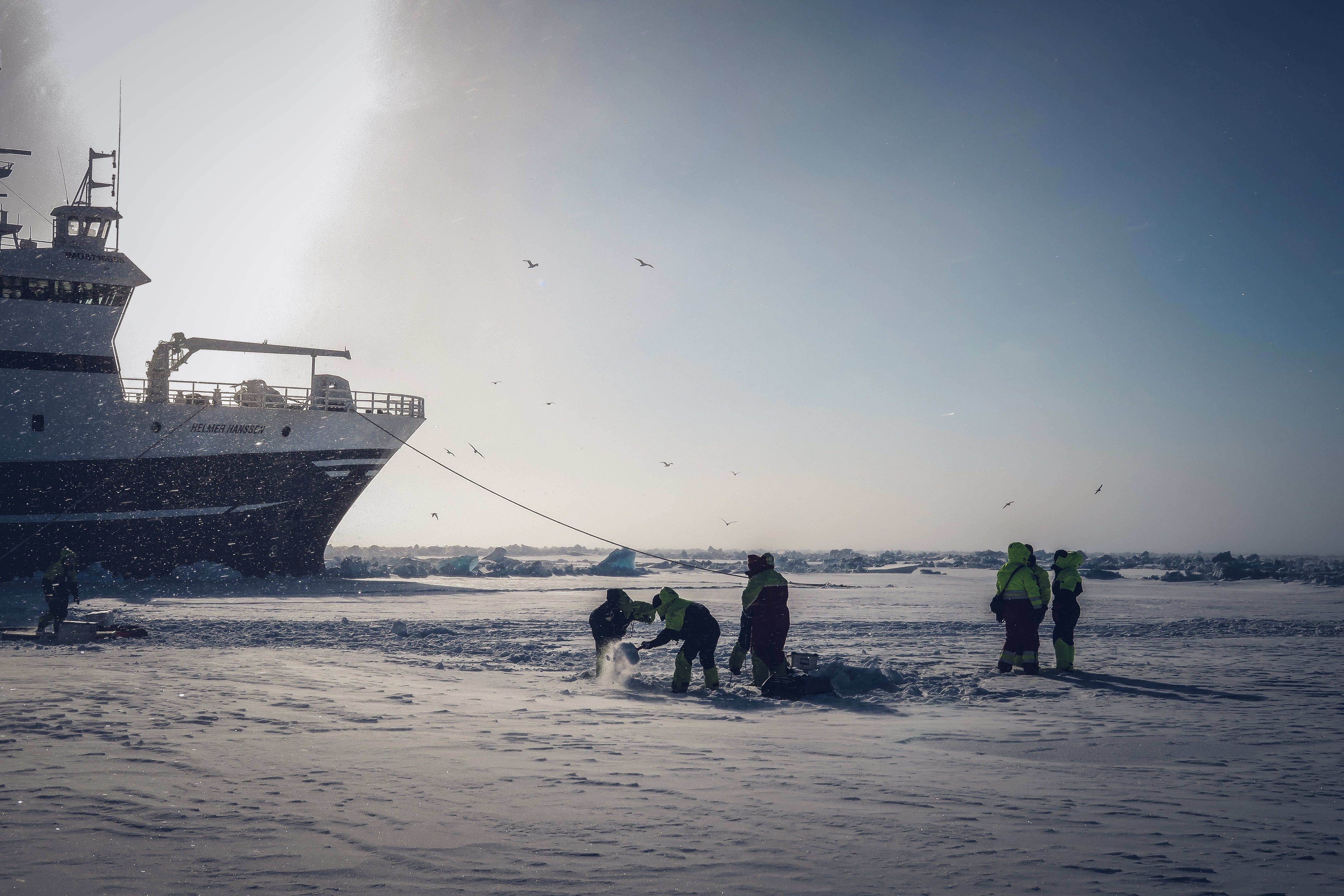 Ice-associated communities develop over time both in terms of structure and function, i.e. increased biodiversity and complexity in terms of interactions between species, biomass accumulation and recycling capacity (Poulin et al. 2011, Bluhm et al. 2017a, Hop et al. 2020). Communities in annual ice (first year ice) must reestablish every year and are often less complex compared to perennial ice (multiyear ice) communities (Ehrlich et al. 2020). Even for sea ice bacteria differences in the diversity and putative function is evident between first year and multiyear ice (Hatam et al. 2016) and there may also be large interannual variations within an area (Bluhm et al. 2017 b). 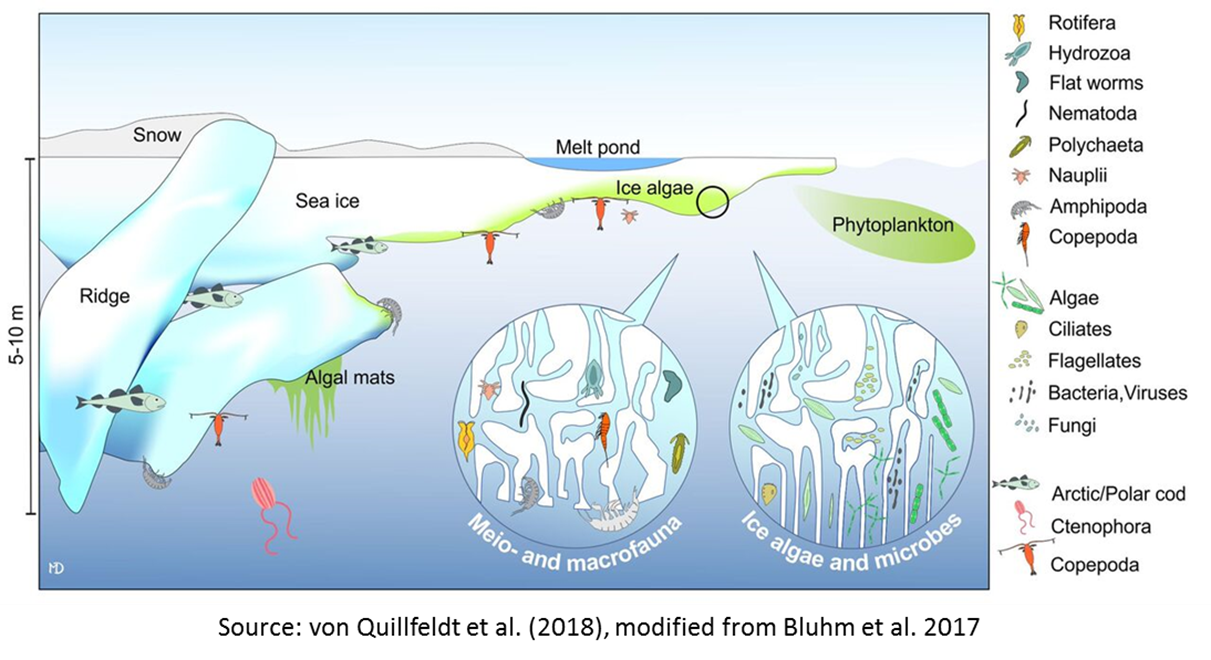 Ice algae are a concentrated, nutritious food source for both animals that live in sea ice and pelagic grazers (Søreide et al. 2010, Leu et al. 2011, Wang et al. 2015, Kohlbach et al. 2016). Ice algae have been estimated to account for 16-22 % of the total primary production in the sea ice zone in the Barents Sea (Hegseth 1998) and up to 50 % in the central Arctic Ocean (Gosselin et al. 1997, Fernandez-Mendez et al. 2015). However, changes in sea ice conditions during the last decades have implications for the contribution of sea ice algae to total production. Ice algae are shade-adapted and sea ice primary production starts earlier than pelagic primary production in the underlying water column, which contributes to extend the productive season in ice-covered areas (Hegseth 1998, Leu et al. 2011, 2015). In addition, some algae can sediment to the seafloor and be utilized by benthic organisms (Carroll and Carroll 2003, Ambrose et al. 2005, McMahon et al. 2006, Moran et al. 2012, Rybakova et al. 2019). The large biomass of benthic communities north-east of Svalbard is explained by ice algae as food supply (Søreide et al. 2013) as well as benthic species that feed by filtering small particles, larger living prey or sea ice deposits (von Quillfeldt et al. 2018). The vertical flux of ice algae, other groups of organisms and particles to the seafloor is related to depth, recycling processes in the water column and ocean currents (Olli et al. 2002 Wiedmann et al. 2020).

Ice algae contribute, relatively more to the total primary production the further north and in areas with multiyear ice compared to areas with younger ice where a larger part of the primary production also occurs in the water column (Wassmann et al., 2006, Wassmann and Reigstad 2011). However, firstyear ice can have sizeable amounts of ice algae (Szymanski and Gradinger 2016), but usually different species than in multiyear ice (Hop et al., 2020). Nevertheless, there are also regional differences in firstyear ice, amongst other an increasing number of species that can be important in phytoplankton blooms the closer one gets to the ice edge (Syvertsen 1991, Hop et al., 2020).

While some ice fauna species spend only parts of their life cycles in the ice, several species of amphipods may be associated with sea ice throughout their entire life cycle. The most prominent ice amphipods are Gammarus wilkitzkii, Apherusa glacialis, Onisimus nanseni and O. glacialis. The carnivorous species G. wilkitzkii is significantly larger than the other species, while the herbivorous species A. glacialis often is the most abundant (Hop et al. 2000, Kunisch et al. 2020, Gradinger and Bluhm 2004, Werner and Auel 2005). Even though the amphipods share the same habitat, they occupy different trophic niches and have different diets (Scott et al. 2001, Kohlbach et al. 2016, Brown et al. 2017). These amphipods have a key role in energy transfer, mainly to juvenile polar cod, Boreogadus saida (Hop and Gjøsæter 2013, Kohlbach et al. 2017), the most abundant fish in the high Arctic. Ocean temperature and ice cover are important controlling factors for the distribution of polar cod in the Barents Sea (Huserbråten et al. 2019). Polar cod is essential for many species of marine mammals and seabirds (Bluhm and Gradinger 2008).

The rapid climate changes in the Arctic Ocean, 2-3 times faster than the global average, large regional and temporal variations (Sakshaug et al. 2009, Reigstad et al. 2011) and the lack of long-term data on ice-associate ecosystems hampers our understanding of the ongoing changes in sea ice biota. However, for several arctic regions it has already been observed that the reduction in multiyear ice has led to a decline in ice algae diversity (Melnikov et al. 2002, Hop et al. 2020). Ice-covered areas impacted by warm Atlantic water masses have experienced increased melting of the underside of the sea ice which is for example reflected in a reduced ice algal biomass in the lower part of the ice in the Barents Sea (Barber et al. 2015). Reduced ice algal biomass can also explain the reduction of ice amphipods in the Nansen Basin north of Svalbard (Hop et al. 2013, Barber et al. 2015). In addition, some species groups have been absent (acoels, flatworms and nematodes) and others greatly reduced (rotifers and ice amphipods) in the ice north of Svalbard in the last decades due to changes in the connection between ice produced in shallow shelf areas and the deep Arctic Basin (Ehrlich et al. 2020). With thinner and consequently more mobile ice the loosely attached ice algal communities on the underside of the ice will detach more easily due to the movement of the ice and/or due to the ice drifting into warmer Atlantic water (Assmy et al. 2013). This may be one of the reasons that this community is observed less frequently than before in the western parts of the Barents Sea (von Quillfeldt pers. comm.). This under-ice community constitutes the most biomass compared to other types of ice algal communities. A longer season with open water has also led to a smaller part of the primary production stemming from ice algae compared to earlier (Wassmann and Reigstad 2011, Barber et al. 2015) and at the same time the pelagic production has migrated further north (Renaut et al. 2018). Thinner ice and more open ice leads to early phytoplankton blooms underneath the ice (Assmy et al. 2017). On the other hand, thinner ice and relatively more snow that weigh down the ice will lead to more flooding at the snow-ice interface which results in a new type of community (infiltration communities) that earlier was rarely observed in the Arctic (McMinn and Hegseth 2004, Fernández-Méndez et al. 2018).