Fisheries and other harvesting 2017

Fishing has the largest anthropogenic impact on fish stocks in the Barents Sea, and thereby, on the functioning of the entire ecosystem. However, observed variations in both fish species and ecosystem are also strongly impacted by climate and trophic interactions. During the last decade, catches of most important commercial species in the Barents Sea and adjacent waters of Norwegian and Greenland Sea varied around 1.5 – 3 million tonnes and has decreased in the last years (Fig. 3.9.1.1.).

Catch variation within the region depends on both the ecosystem dynamics effecting commercial stocks and management considerations. Agreed-upon harvest control rules exist for all major species, which are usually applied when setting TACs; actual catch removals tend to be very close to the agreed TACs. 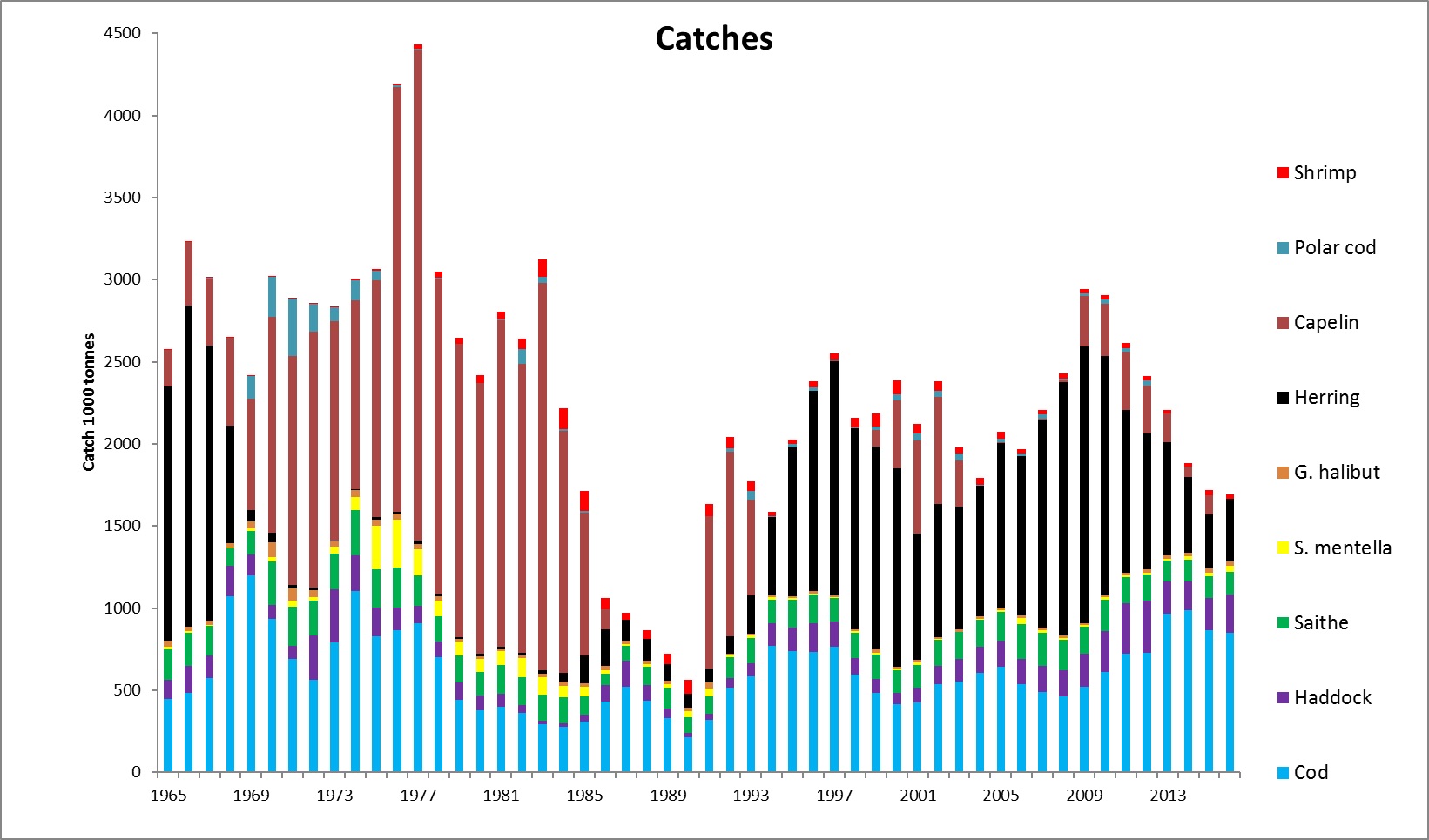 Fisheries influence the ecosystem by removing substantial quantities of fish for human consumption and for other purposes. A fishery is not considered sustainable if it impairs recruitment to the fish stock. Single species management often focuses on measuring stock status through benchmarks called biological reference points (BRPs). BRPs for single species management are usually defined in terms of fishing mortality rate (F), total stock biomass (TSB), spawning stock biomass (SSB), and in terms of target and limit reference points. Limit BRPs suggest maximum F levels and minimum B levels that should adhered to. These BRPs are then compared to estimates of F and B from stock assessments to determine the state of the fishery and suggest management actions.

Fishing above the limiting reference point for fishing mortality (Flim) will eventually bring the spawning stock down to Blim; below which recruitment will be impaired. As such, Flim may hence be used as an indicator for unsustainable exploitation which may negatively influence both the stock and the ecosystem. Keeping F below Flim and the stock above Blim may, however, not provide sufficient protection. Proliferation of smaller and younger adults within a stock as result of high fishing pressure, results in a lower stock reproductive potential; compared to a stock having adults with a wider range of sizes and ages. The harvest rate and fishing pattern should hence fit with these biological requirements.

Recently the Maximum Sustainable Yield (MSY) concept was implemented in ICES advisory work. The ICES approach to fisheries advice integrates the precautionary approach, maximum sustainable yield, and an ecosystem approach into one advisory framework. The goal is, in accordance with the aggregate of international guidelines, to inform policies on sustainable fisheries removals from productive fish stocks within healthy marine ecosystems. Maximum sustainable yield is a broad conceptual objective aimed at achieving the highest possible yield over an infinitely long period of time. For several stocks, MSY reference points have been identified and implemented into fishery management strategies.

Furthermore, a fishery may not be considered optimal if the fish are caught too early, i.e. if the net natural growth potential is not utilized. This is called growth overfishing and makes the total yield less than it would be if the fish had been allowed to grow to a reproductive size/age. Introduction of minimum fish catch size limits and selective gears are the most common management measures to avoid growth overfishing.

Larvae and juveniles of all groundfish species are important predators on zooplankton. Accordingly, it is important that a healthy marine food web have sufficient plankton production to support plankton-eating invertebrate and fish species, as well as production at higher trophic levels, including: fish species; sea birds; marine mammals; and humans. For an ecosystem approach to management of commercial fish stocks it is essential to consider production at all trophic levels from a multispecies perspective.

Barents Sea stocks of cod, haddock, and saithe all have fishing mortality (F) based management plans which are largely followed by managers when setting TACs; all are presently harvested close to or below MSY (Fig. 3.8.1.2), and all are above Bpa at present. Several variants of harvest control rules (HCR) for cod and haddock were tested by ICES in 2016. A new harvest control rule for cod, with increasing F at high stock sizes, was adopted by the joint Russian-Norwegian Fisheries Commission in autumn 2016. The HCR for haddock was not changed. The current HCR for saithe was set by Norway in 2013. 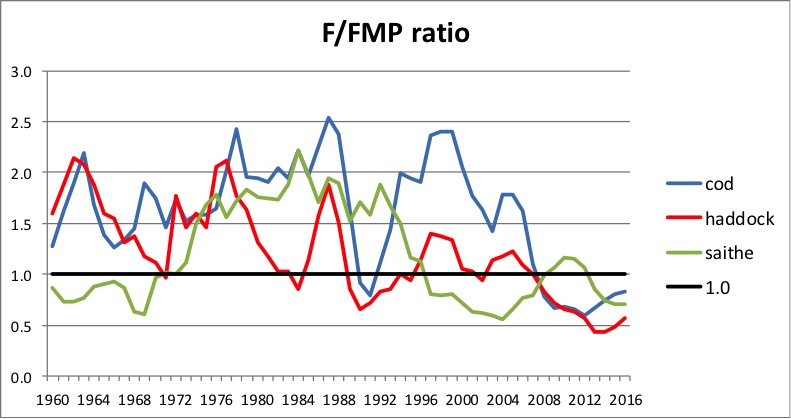 Figure 3.9.1.2. Annual fishing mortalities of the Northeast Arctic cod, haddock and saithe stocks relative to fisheries management plan (FMP), i.e., the level used in the management plans for these stocks when SSB > Bpa (and SSB< 2*Bpa for cod) (ICES 2017). Note that saithe is mainly found along the Norwegian coast and off the coast south of the Barents Sea – little in the Barents Sea itself.

The exploitation rate has during some periods been critically high. Because of the harvest control rules, better regulation, and enforcement, this problem has been reduced in recent years. However, the recent increased exploitation rate for cod requires careful monitoring. The 2018 TAC for cod was set 63 kt above the advice from ICES and corresponds to an expected fishing mortality of 0.49 (not shown in Figure 3.9.1.2.).

The current large cod stock has caused concern about it being ’too large’ relative to food availability, and ecosystem carrying capacity. Thus far, cod population dynamics appear little affected by the large stock size, but the question remains valid. The introduction of a harvest control rule to increase F levels at high stock sizes could be a step taking such concerns into account. However, the concept of a stock being ’too large’ is not, at present, incorporated in the ICES advice framework; although, such issues are well recognized, e.g., in management of freshwater fisheries and wildlife.

The capelin fishery is managed through a target escapement strategy. MSY for capelin will depend strongly on size of the cod stock, and offers little meaning within a single-species context. There was no fishery for capelin in the Barents Sea during 2004-2008 due to poor stock condition. During 2009-2013 the stock was sufficiently large to support a quota between 200,000 and 400,000 tonnes. After which time, both stock and catch decreased, and there was a ‘mini-collapse’ of the stock; the fishery was closed during 2016-2017. The fishery reopened in 2018 with TAC set at 205,000 tonnes. Since 1979, the capelin fishery has been regulated through quotas set using a harvest control rule enforced by the Norwegian-Russian Fishery Commission. The harvest control rule is considered by ICES to be in accordance with precautionary and ecosystem approaches to fisheries management. Being a forage fish in an ecosystem where two top predators (cod and haddock) are presently at high levels, the capelin stock is now under heavy predation pressure. The fishery is restricted to the pre-spawning period (mainly February-March) and exploitation is regulated based on a model that incorporates natural mortality, including predation from cod. A minimum landing size of 11 cm has been in force since 1979. The management plan’s harvest control rule is designed to ensure that SSB remains above the proposed Blim of 200,000 metric tons (with 95% probability).

For Greenland halibut, no limit reference points have been suggested or adopted. The assessment is still considered to be uncertain due to problems with the age-reading and input data quality. The exploratory assessment is accepted as indicative for stock trends. Although many aspects of the assessment remain uncertain, fishery independent indices of stock size from research surveys indicate an increase in stock size over the last decade, which now appears to be levelling off. Due to poor recruitment, some decrease in stock size is expected in the coming years. Therefore, it is important not to increase the exploitation rate and catch above the present level. Reconstruction of historical (pre-1992) stock and exploitation levels is needed to provide a stronger basis to determine reference points and develop sound of harvest control rules.

Analytical assessments and advice are provided for ICES Subareas I and II combined. The fishery for S. mentella (beaked redfish) operates in national and international waters, and is managed under different schemes and by different management organizations. A pelagic fishery for S. mentella has been conducted since 2004 in the Norwegian Sea outside the EEZ. This fishery is managed by the Northeast Atlantic Fisheries Commission (NEAFC). A new directed demersal and pelagic fishery has been permitted in the Norwegian Economic Zone since 2014, and is managed by Norway and Russia. This is mostly a directed fishery; while part of the TAC is set aside to cover bycatch by Norway, Russia, and third-party countries. The geographical distribution of Norwegian catches during 2016 is shown in Fig. 3.9.1.4. 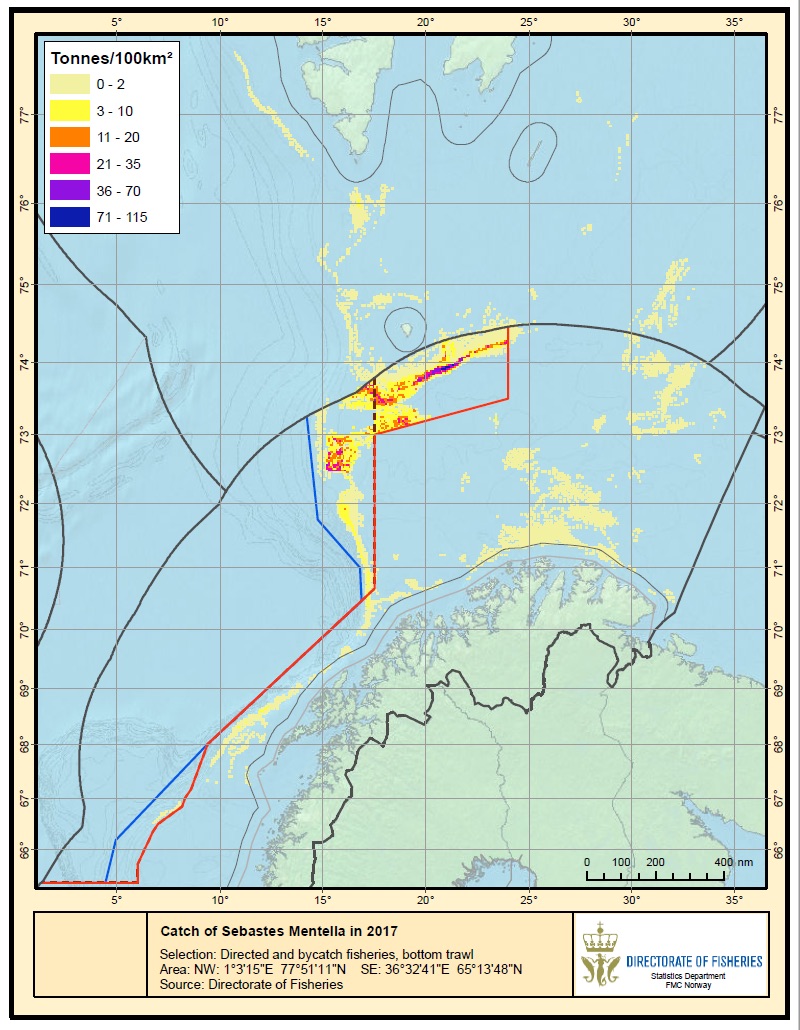 Figure 3.9.1.3. Sebastes mentella in Subareas 1 and 2. Location of S. mentella catches by Norwegian fishing vessels in 2017, both in a directed fishery and as bycatch.

An ICES Benchmark Workshop was held for this stock in the beginning of 2018 to evaluate the current data and assessment methodology and propose improvements. F0.1 (19+) = 0.080 was considered a good proxy for FMSY. Biomass trigger points of 600-800 kt are suggested. The current estimate of fishing mortality is below the FMSY proxy, while the current SSB is estimated to be well above the range suggested for trigger points.

The Joint Norwegian-Russian Fisheries Commission requested that an evaluation of possible management plans for this stock be carried out during 2018. In the absence of a management plan, ICES advised a precautionary basis that an annual catch in 2015, 2016, and 2017 be set at no more than 30 000 tonnes below the MSY catch level, and that measures currently in place to protect juveniles should be maintained. Accordingly, Norway and Russia set a quota of 30 000 t for those years. For 2018 the quota was set to 32 658 t, corresponding to status quo F.

An ICES Benchmark Workshop was also held for Sebastes norvegicus (golden redfish) at the beginning of 2018. No limit reference points have yet been adopted. SSB has been decreasing since the 1990s and is currently at the lowest level in the time-series. Fishing mortality is high, but there are some signs of improved recruitment. For many years, ICES has advised no fishing on this stock, given the very low SSB (below any possible reference points) and poor recruitment. Most catch of this stock is by-catch. A stock rebuilding plan is needed.

There has been little economic interest in developing a fishery for polar cod; no fishery has been conducted in recent years. Stock size as measured in the BESS survey, has also been at very low levels, except for a one-year peak in 2016. The historical fishery conducted mainly by Russia, took place in late autumn when concentrations of polar cod were targeted during southward spawning migrations along the coast of Novaya Zemlya.

Three species of wolffish: Atlantic wolffish (Anarhichas lupus), Spotted wolffish (Anarhichas minor), and Northern wolffish (Anarhichas denticulatus) are taken mostly as bycatch in fisheries for gadoids in the Barents Sea, but also in a directed longline fishery. From 1905 to 1950, international catches of wolffish in the Barents Sea and along the northern Norwegian coast increased from 100 to 14 000 tonnes. Until 1998, annual landings were between 6 000 and 44 500 tons. Large catches during 1997-2001 were primarily due to intensive targeted fishing for northern wolffish related to bycatch regulations on other valuable species (e.g., Greenland halibut) and a growing Russian market. After 2001, total wolffish catch north of 62 N decreased; but has improved slightly in recent years, reaching 25 862 tonnes in 2017. Russian catches increased from about 13 000 tonnes — a level maintained over several years — to 18 000 tonnes in the past two years. Norwegian catches have been aroundt 6,000 tons in recent years (Figure 3.9.1.6). Northern and spotted wolffish comprise more than 90% of total wolffish catch in the Barents Sea. Atlantic wolffish are mainly caught in the coastal zone, but also beyond the coastal region. 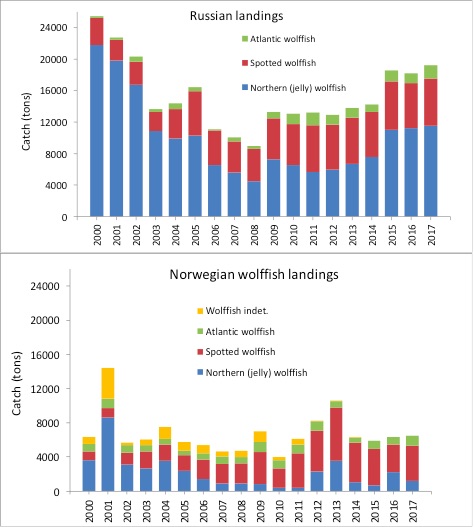 Information on the species composition of the Norwegian fisheries north of 67 N is available from the Norwegian Reference Fleet (NRF), i.e., 15 high-seas and 24 coastal fishing vessels contracted by the Institute of Marine Research. Such data are now routinely collected from these vessels’ fishery each day or every other day. The impact of fishing activity on non-regulated species and on the ecosystem will be a subject for further research.