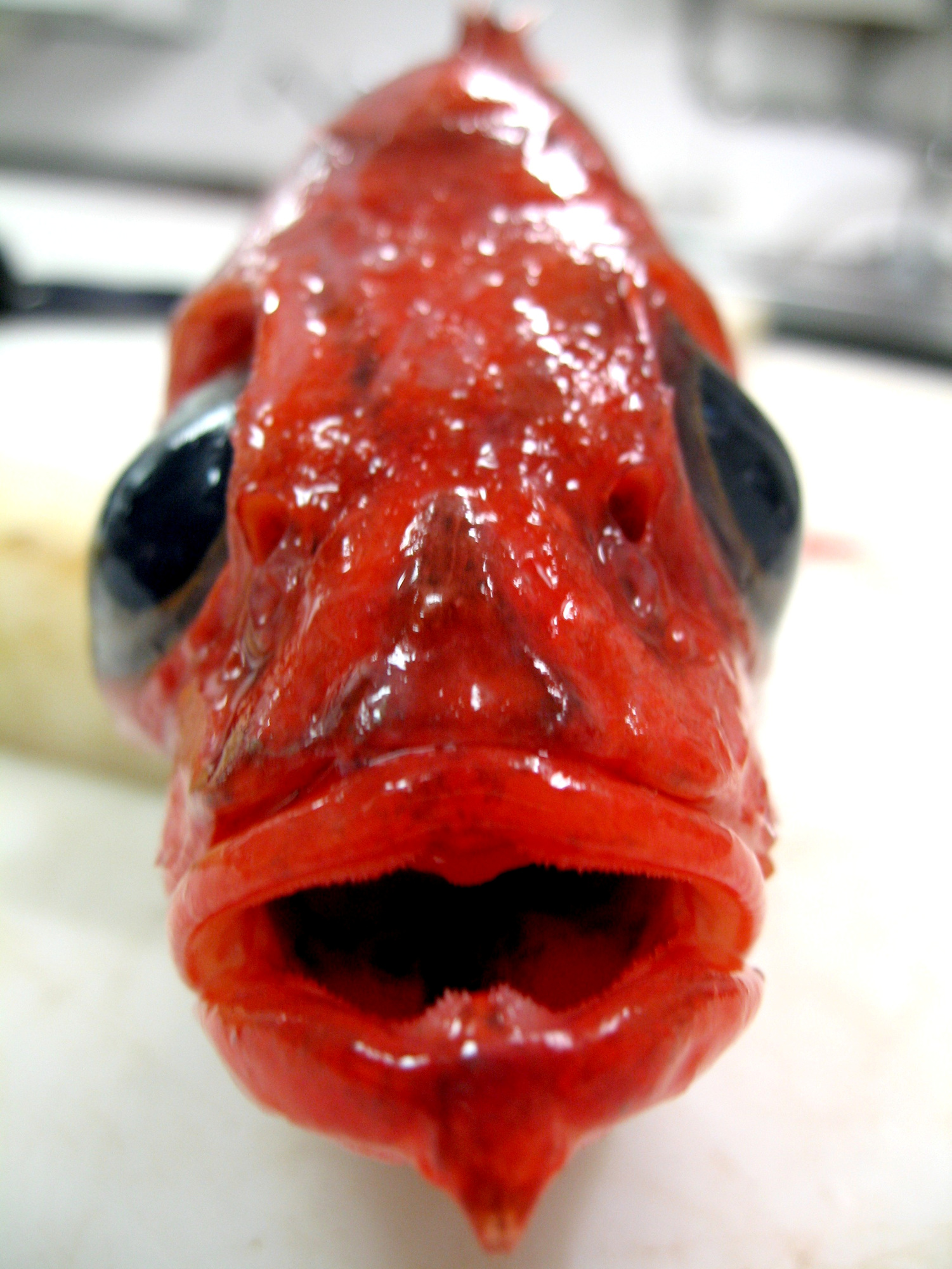 Distribution maps for cod, haddock, long rough dab, Greenland halibut, redfish, and six other demersal fish species can be found at: http://www.imr.no/tokt/okosystemtokt_i_barentshavet/utbredelseskart/en, and are based on data from the BESS.

Abundance estimates are available for the commercial species that are assessed. Fig. 3.6.1 shows biomass of cod, haddock, and saithe (Pollachius virens) from the ICES AFWG assessments made in 2017. Saithe occurs mainly along the Norwegian coast and off the coast south of the Barents Sea; few accur in the Barents Sea itself. Total biomass of these three species is close to the highest recorded in time series dating back to 1960. Greenland halibut and redfish, in particular S. mentella, are important commercial species with large part of their distribution within the Barents Sea. Time series of biomass estimates for S. mentella and Greenland halibut are much shorter than those for haddock, cod, and saithe. Other than these main commercial stocks, long rough dab is the demersal stock with the highest biomass. Overall, cod is the dominant demersal species. 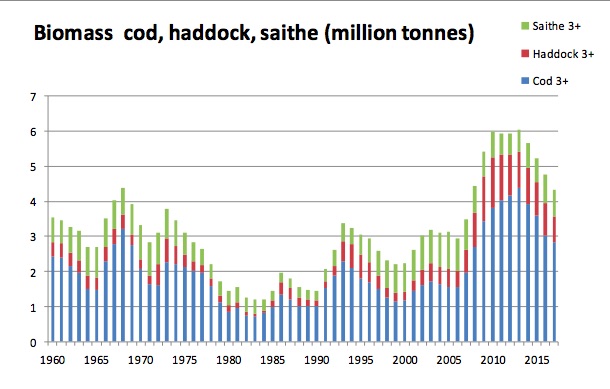 0-group cod were widely distributed within the 2017 surveyed area. The main dense concentrations were observed in the central part of the Barents Sea. The 2017 cod abundance index is underestimated as the north-eastern region was not covered.estimated 0-group cod biomass (961 thousand tonnes) is higher than for 2015 and 2016 and higher than the long-term mean (618 thousand tonnes). The abundance index for the 2017-year class is twice the long term mean, and may be characterized as strong (Fig. 3.6.2). Lengths of 0-group cod were between 4 and 14.4 cm; with a mean length of 8.3 cm, higher than the long term (7.6 cm). Most fish (89%) were between 7.0 and 9.9 cm; indicating good growth, and sufficient feeding and living conditions during the first summer. 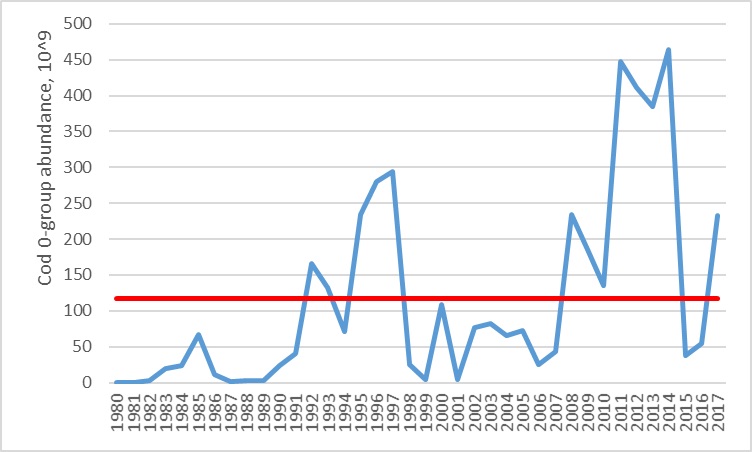 The Northeast Arctic cod stock is currently in good condition, with high total stock size, and spawning stock biomass (Fig. 3.6.3). The 2004 and 2005 year classes were very strong, but subsequent recruitment at age 3 returned to an average level (Fig. 3.6.4). 0-group abundance has been very high in recent years (2011-2014); but thus far, this has not resulted in strong year classes. 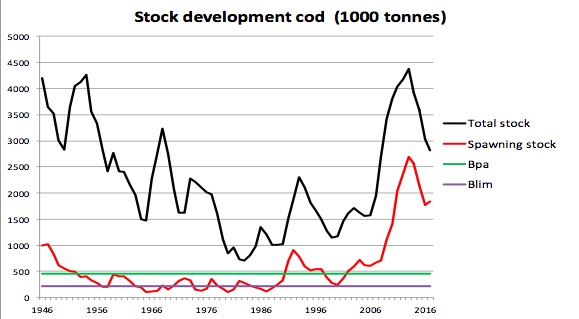 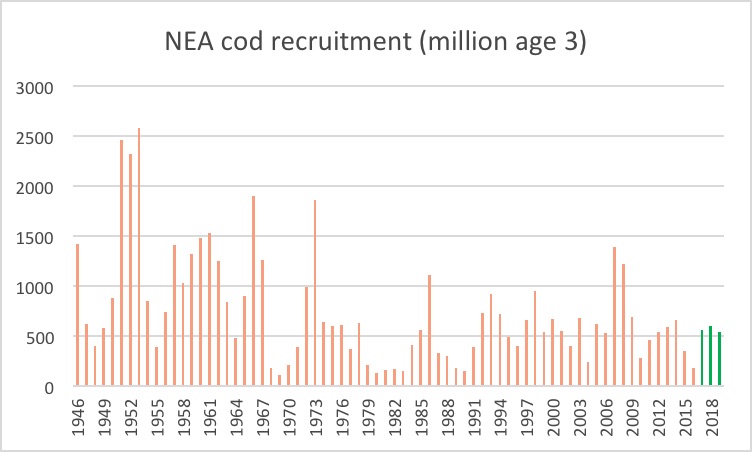 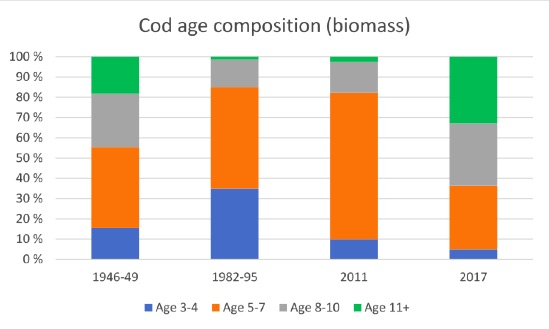 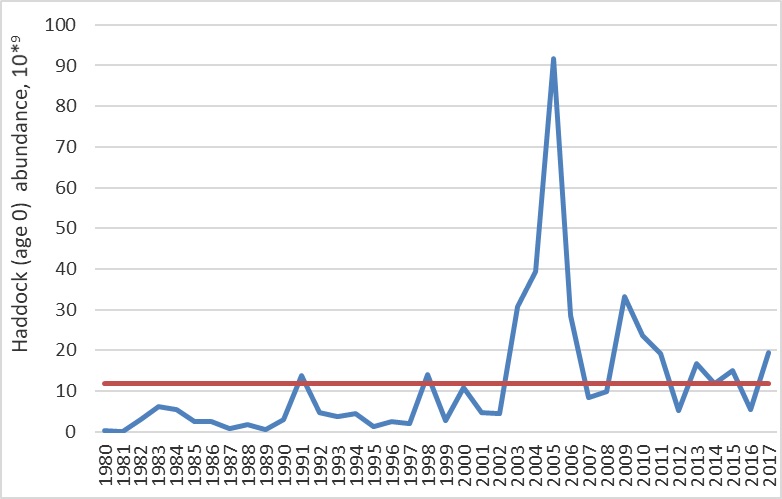 The Northeast Arctic haddock stock reached record levels in 2009-2013, due to the very strong 2004-2006-year classes. Subsequently, recruitment has normalized; the stock is still at a relatively high level, but has declined in recent years (Fig. 3.6.7 and 3.6.8). 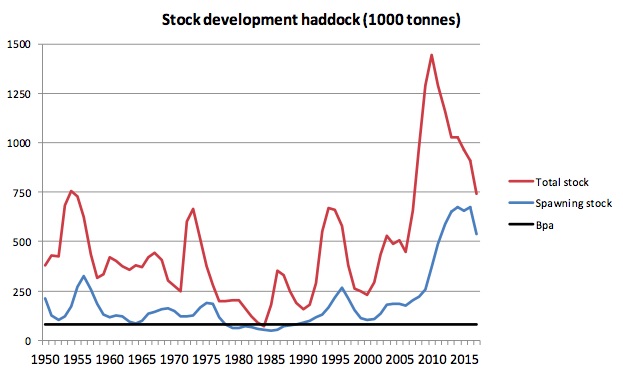 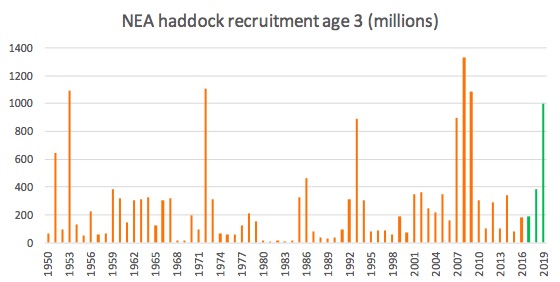 In 2017, 0-group long rough dab were observed at survey boundary areas. The largest catches were taken in the south-eastern Barents Sea. Some 0-group individuals were taken by bottom trawl; this indicates that settlement to the bottom has begun, and that abundance indices will be slightly underestimated in 2017. The long rough dab index was the lowest since 2014, and lower than the long-term mean (Fig. 3.6.9). Fish length varied between 1.0 and 5.4 cm, with a mean length of 2.9 cm; this was lower than the long-term average (3.3 cm). 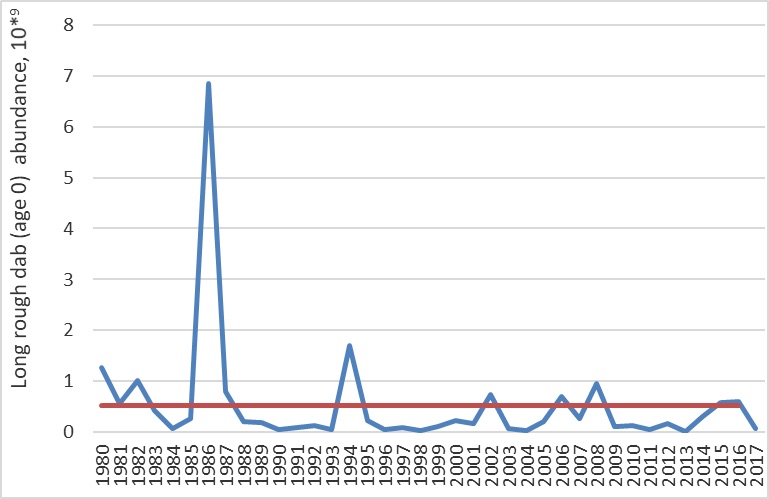 Older long rough dab (age 1+) are widely distributed in the Barents Sea. During the Russian Autumn-Winter Survey (October-December) and the BESS (August-September), major concentrations of long rough dab were observed in the central-northern and eastern areas and were dominated by numbers in the bottom trawl catches in surveys. Many small fish were observed in trawl catches especially in the eastern areas at the 2015-2016 BESS. Long rough dab abundance has been somewhat stable over last decade according to both the Russian Autumn-Winter Survey and the BESS time series (Fig 3.6.10 and 3.6.11). 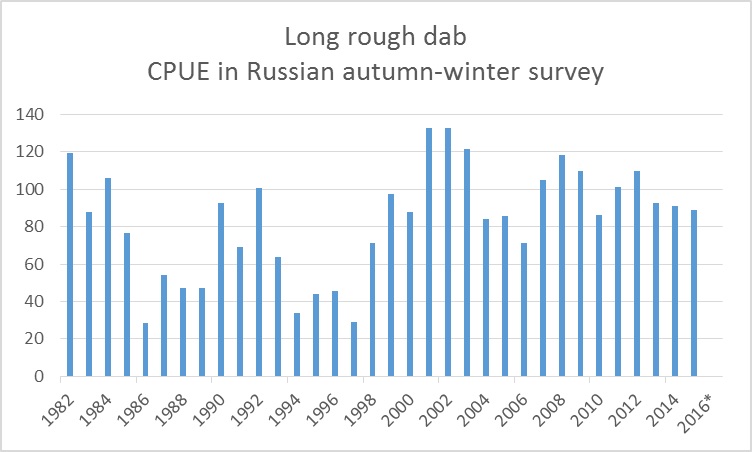 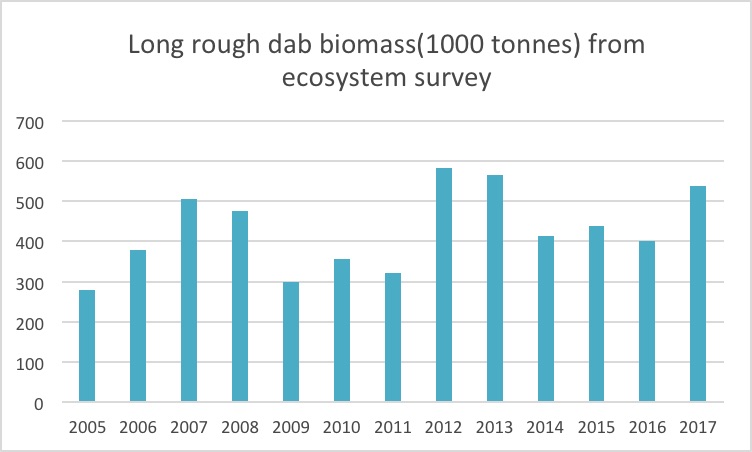 Since 2005, only low concentrations of 0-group Greenland halibut were found. In 2017, they were observed north and south of the Svalbard/Spitsbergen where only few small catches were taken. The BESS survey does not cover the numerous Svalbard/Spitsbergen fjords, where 0-group Greenland halibut are abundant; therefore, this index does not reliably reflect recruitment to the stock at age 0; however, it may reflect the minimum abundance of the year-class strength in the standard long term surveyed area. During 2012-2017, abundance of Greenland halibut continuously declined, the 2017-year class index is also low. Fish length varied between 6 and 8.9 cm, while most fish (67%) were between 7.5 and 8.4 cm. The mean length was 7.7 cm; higher than the long term mean (6.3 cm).

The adult component of the stock was, as usual, mainly distributed outside the ecosystem survey area. On the other hand, in recent years an increasing number of large Greenland halibut has been captured in deeper waters of the area surveyed by the BESS (Fig 3.6.12). Northern and north-eastern areas of the Barents Sea serve as nursery grounds for the stock. Greenland halibut are also relatively abundant in deep channels running between the shallowest fishing banks. Figure 3.6.13 shows an index for Greenland halibut at the nursery grounds, based on the BESS results north of 76.5°N from northwest of Svalbard and east to Franz Josef Land. 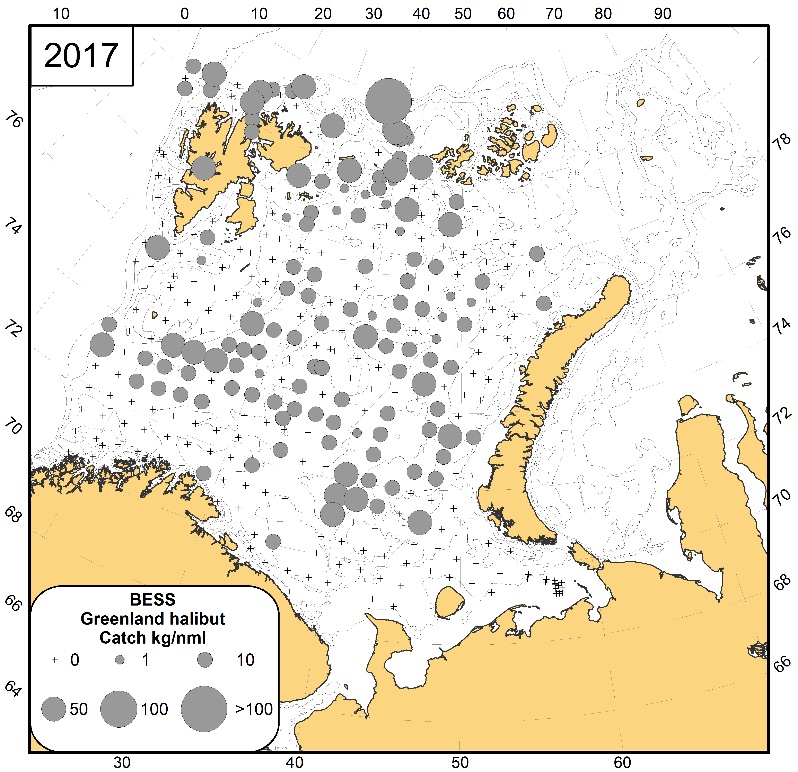 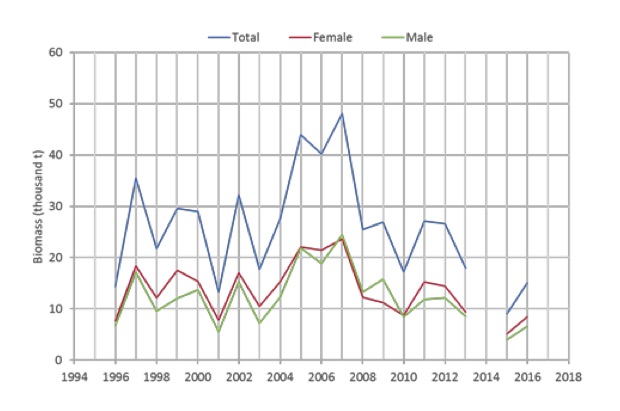 Figure 3.6.13. Biomass index for Greenland halibut at the nursery areas; 2014 excluded due to poor area coverage. 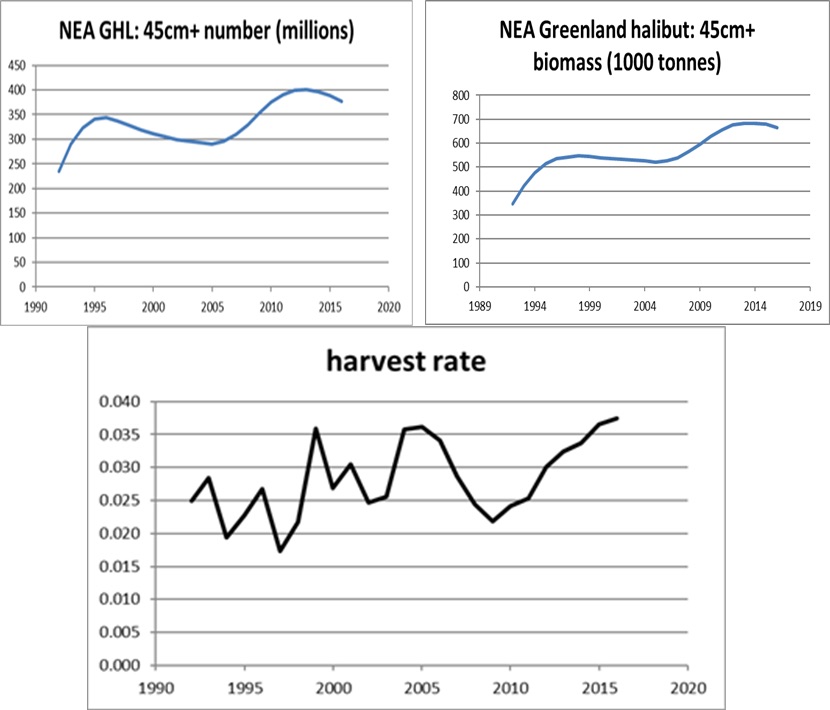 In 2017, redfish, mostly Sebastes mentella, were distributed in western and northern areas of the Barents Sea, with the densest concentration west of Svalbard/Spitsbergen Archipelago. Estimated 0-group redfish biomass (100 thousand tonnes) was lower than the long-term mean (168 thousand tonnes). Abundance of 0-group redfish was lower than the long-term mean; thus, the 2017 year-class can be characterized as weak. However, some 0-group fish may occur outside of the area surveyed. The estimated index of 0-group redfish represents only shelf areas of the Barents Sea and, therefore, an unknown proportion of total 0-group abundance.

In 2017, deep-water redfish were widely distributed in the Barents Sea. During the ecosystem survey and the winter survey, the largest concentrations were observed, as usual, in the western and north-western parts of the Barents Sea. Biomass was at a higher level during 2013-2017 than in preceding years. Geographical distribution of deep-water redfish during the 2017 ecosystem survey is shown in Fig 3.6.15. Most adult fish are found in the Norwegian Sea. Stock development from the latest ICES AFWG assessment is shown in Fig 3.6.16. 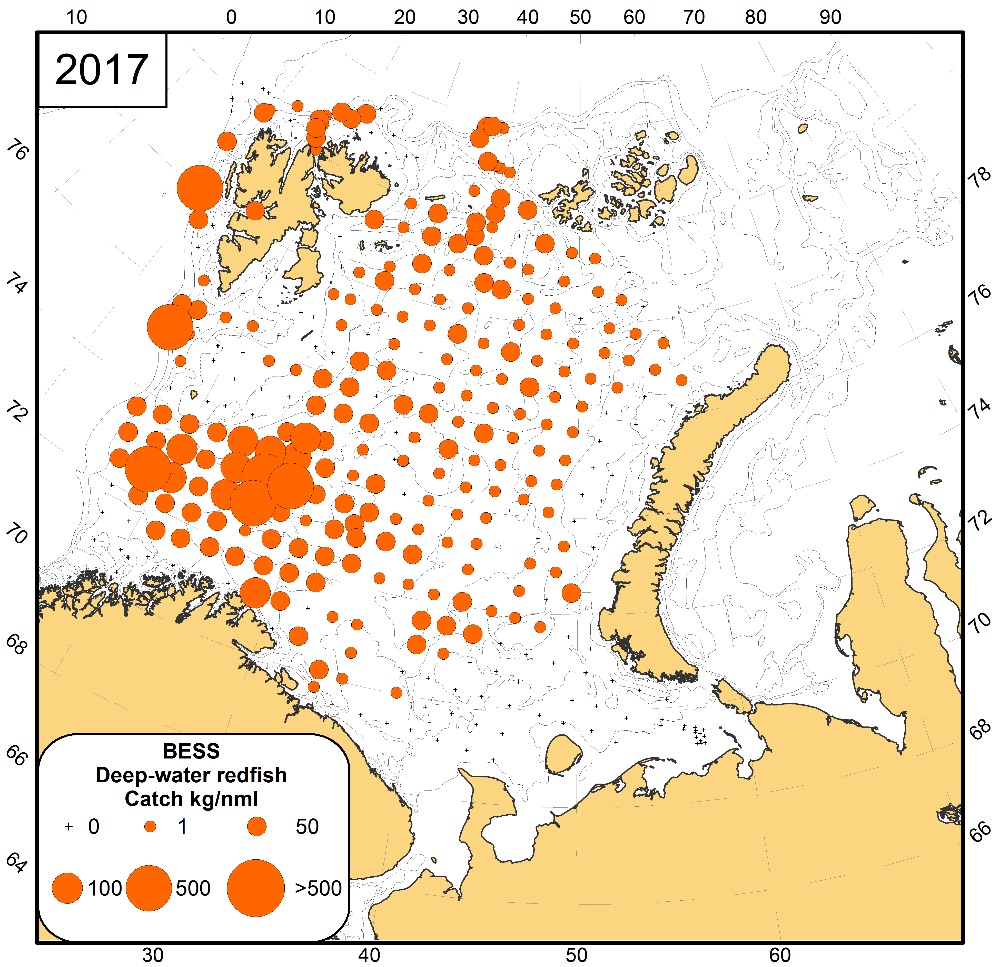 Figure 3.6.15. Geographical distribution of deep-water redfish during the 2017 BESS survey. 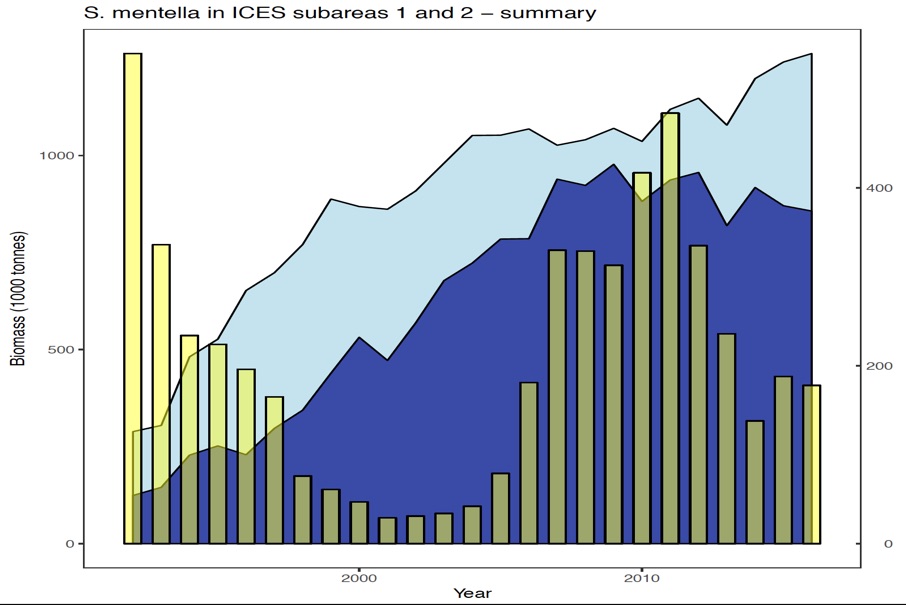